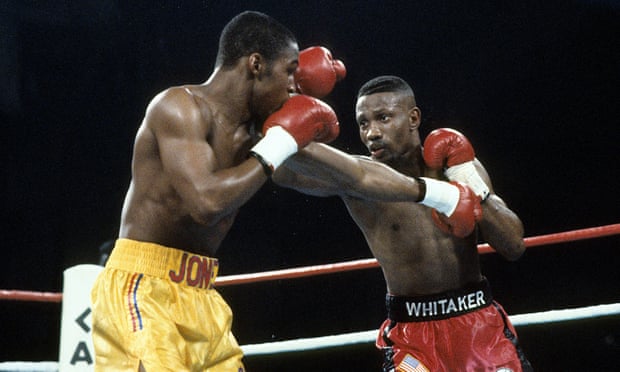 Pernell Whitaker (right) during his victory over Anthony Jones in Las Vegas in 1991. The fight secured Whitaker the WBC, IBF and WBA lightweight titles. (Photograph: The Ring Magazine/The Ring Magazine via Getty Images)

Pernell Whitaker, widely considered to be one of the greatest defensive boxers of all time, has died after being hit by a car. He was 55.

Police in Virginia Beach said Whitaker was killed as he crossed the road at an intersection on Sunday night. “When officers arrived on scene they located an adult male victim who had been hit by a vehicle.

The victim succumbed to his injuries on the scene,” a Virginia Beach Police Department spokesman said in a statement. “The driver of the vehicle remained on scene with police.”

Whitaker was elected to the International Boxing Hall of Fame in 2006, and was a champion in four weight classes: lightweight, junior welterweight, welterweight and junior middleweight.

The American was known as a brilliant defensive boxer with many opponents struggling to lay a hand on him. He retired in 2001 after three defeats in his final four fights with but he was in his prime in the 80s and 90s.

He also won a gold medal as a lightweight at the 1984 Olympics.

He was a successful trainer after his retirement although he became involved in an ugly dispute with his mother over money in recent years. His youngest son, Devon, described his father as a “cool guy” on Monday.

“That’s all I can say about him,” he told the Virginian Pilot newspaper. “I can’t really say how I’m feeling because I’m feeling shocked. I’m still trying to process everything that’s going on. But he was a cool guy.”