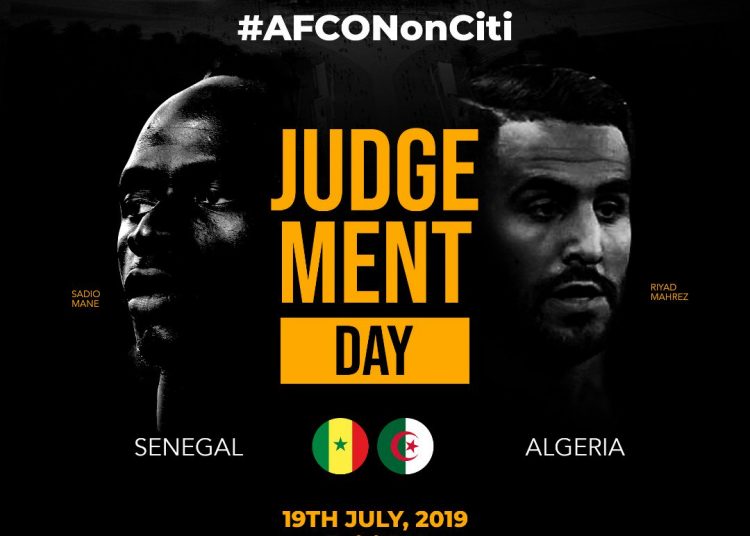 The last few weeks in Egypt have been a lovely roller coaster ride for teams, fans and everyone who decided to follow the 2019 Total Africa Cup of Nations.

We had twelve days of group stage matches, two days of rest, elimination and qualification of teams from the first round of the tournament.

We were a served a further elimination of powerhouses like Ghana, defending champions, Cameroon, from the round of 16 in the Africa Cup of Nations.

After that, came the quarter-finals which also spat out some teams as the likes of Tunisia eased past tournament surprise package Madagascar and Nigeria stayed strong in their bid to win their third AFCON trophy.

The semifinals gave the Super Eagles a broken heart as Les Fennecs were handed a ticket into the final, courtesy a sumptuous free-kick by the captain, Riyad Mahrez.

The Lions of Teranga also eased past the Carthage Eagles of Tunisia in the other game of the other semifinals game.

Now that all these have happened, the stage is set for the final game of the 2019 Africa Cup of Nations.

The Lions of Teranga have shown a steady but impressive performance over the course of the tournament as they face Algeria again in the tournament.

Senegal won one, drew one of their group stage matches but was beaten by Algeria, the team they now face in the finals of the AFCON.

Aliou Cisse and his men are on a one-goal per game project as they defeated Uganda, Benin, and Tunisia en route to the finals.

With the pain they have for losing to their North African opponents, it will be a case of revenge or repeat as curtains drawdown in the 2019 AFCON in Egypt.

And key losses to the Senegalese team will be the absence of Napoli star, Kalidou Koulibaly who will miss the finals due to excess yellow cards accumulated.

Les Fennecs have been by far the most impressive team of the tournament as they are unbeaten so far winning five and drawing just once.

Djamel Belmadi’s men have scored an impressive 12 goals in the tournament, the most scored by any team.

The North Africans ended the group stages without conceding a goal as they claimed a maximum of nine points against Kenya, Senegal, and Tanzania.

The Desert Foxes will be on the alert as they know Senegal will be eager to avenge the defeat they suffered in the group stages of the tournament.