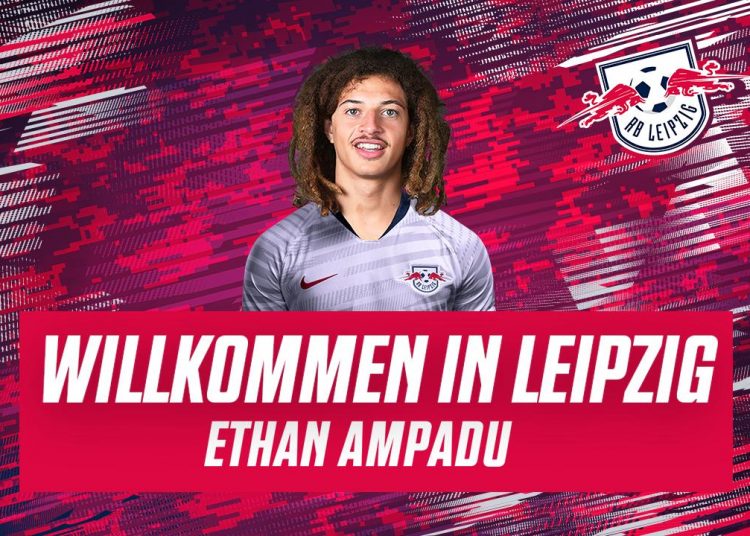 Chelsea defender, Ethan Ampadu has joined the Bundesliga side, RB Leipzig on a season-long loan.

The Welsh international did not have many opportunities to play for the first team under Sarri last season although he signed a five-year contract extension in September of 2018.

The 18-year-old has been admired by new Chelsea coach, Frank Lampard, but will have to let go of the young lad for a season.

“I tried to sign Ethan on loan at Derby last year, so I’m a big fan,” he said.

“But with the minutes he played last year, in the interest of Ethan and of Chelsea, the idea he can play a lot of games somewhere could be good for him.

“I really wanted to work with Ethan this year. That’s a slight disappointment, but it’s to benefit of him. In midfield and defence, we have a lot of quality, so each player is a case by case.”

Yet despite Chelsea’s transfer ban, Lampard believes that Chelsea’s midfield strength means the Wales international will be better served this season by plying his trade elsewhere.

The teenager had attracted interest from a number of clubs including Aston Villa and some other Championship sides but the Welsh have signed with RB Leipzig where he will wear the No. 26 shirt.

“I am very happy to be at RB Leipzig and start the season with the team,” said Ampadu. “I want to get to know the team as quickly as possible and integrate myself.

“I’ve been following and seeing how fantastic young players have developed here over the last few years and what potential there is in this club.

It also means that he will garner Champions League experience, with RBL having finished third in the Bundesliga last season.