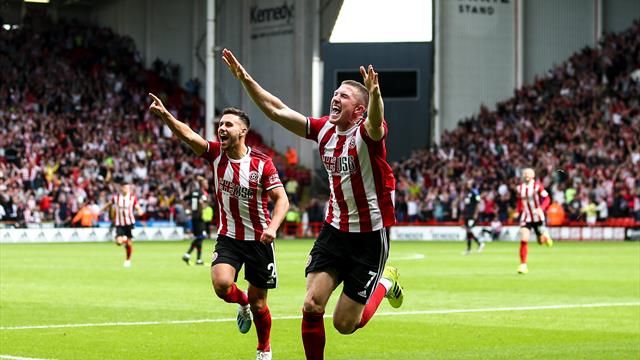 Sheffield United made it a winning start at Bramall Lane after 12 years out of the top flight as they beat Crystal Palace 1-0.

Fans had to wait more than a decade for the Blades to return to the Premier League but they got off to the perfect start as John Lundstram netted the winner in the second half.

Wilfried Zaha was recalled to the Crystal Palace starting line-up for their Premier League match against Sheffield United.

Zaha wanted to leave the Eagles this summer but did not get a move away and began the season as a substitute last weekend as Palace drew 0-0 at home against Everton.

The Blades were unchanged from their opening-day draw at Bournemouth as top-flight football returned to Bramall Lane for the first time in 12 years.

After the early scare, things looked promising for the hosts. By contrast, their build-up play was sharp and varied, with pin-point switches of play between the flanks.

Baldock was causing all sorts of problems for Palace down the right. Perhaps watching England manager Gareth Southgate was looking to nip in ahead of Greece, for whom the wing-back is also eligible due to his grandparents.

The Blades thought they should have had a penalty midway through the first half when an Enda Stevens’ shot looked like it struck the hand of Martin Kelly, but referee David Coote waved away the appeals. Shortly afterward Baldock saw an effort deflected over the crossbar.

An injury forced off John Fleck after 29 minutes, with Luke Freeman replacing him, but the change did not affect the hosts, who looked dangerous again when Robinson controlled a long diagonal pass and shot over the bar.