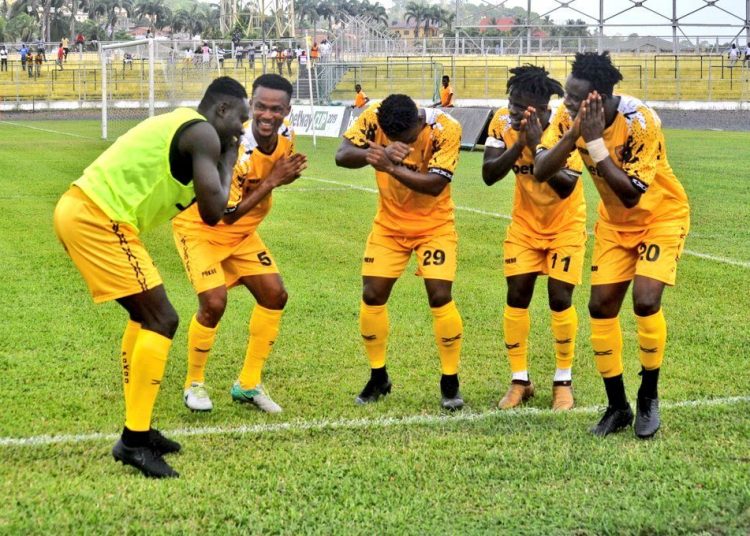 Streaming down the Len Clay right wing, arms spread out, mouth wide open; like a bird, Shafiu Mumuni was flying.

The fans he’s speeding towards are agog with jubilation; one kick here, one random hug there. As Shafiu stopped, head gazing into the sky and arms wide open like the statue of Christ the Redeemer, in unison, the fans belted out “Shafiu! Shafiu! Shafiu!”.

It was worship; worship of a hero, a savior, an icon. Those were the scenes that followed Shafiu’s 3rd goal, a hattrick in just 9 minutes, the fastest ever recorded by an Ashantigold player, and it was befitting that it came from Shafiu, a succulent finish at the near post.

Mosibe in goal for Akonangui was dazed, hurt and “bleeding”. And you don’t even need Sarkodie fans to explain this to you. The red shirts of the befuddled Akonangui defenders was accurate metaphor.

Ashantigold came into the game as favorites, having secured a 1-1 draw in the away leg a fortnight ago. But even the staunchest Aboakese, did not envisage the masterful start to the game.

35 seconds after kick off, penalty to the Miners. Referee Abdoulaye Rhisa spotted a handball in the Akonangui area. Shafiu converted.

Fans were still celebrating the opening goal when the second went in just 6 minutes later. Shafiu again, this time, showing great intelligence and awareness to capitalize on a defensive blunder to slot home after rounding the goalkeeper.

When he completed his hattrick 3 minutes later, Shafiu’s star was shining, much brighter than the cloudy skies that brought a downpour in the second half, a half that was all about managing a result than chasing one.

While many other many others deserve praise for an all round wonderfully executed game; coach Ricardo Da Rocha, Brazilian midfielder Marco Silva, Latif Anabila, the day truly belonged to Shafiu Mumuni.

Shafiu Mumuni doesn’t often get talked about a lot. He doesn’t get linked to fancy moves to Asante Kotoko or Hearts of Oak, neither does he feature in the most ludicrous transfer stories every window. Not even in May, when he scored a hattrick and an own goal, in a 4-1 thrashing of Aduana Stars in the NC Special Competition, was he talked of in the transfer portals.

But he will go down as one of the best goalscorers this great club has had. And this is the club that produced the likes of CK Akonnor and Augustine Arhinful.

So Ashantigold match on. 3-0 winners on the day and 4-1 aggregate success over Akonangui of Equatorial Guinea has now set them up with a meeting with Moroccan side RS Berkane in the next stage of qualifying for the CAF Confederation Cup.

Arguably, that will be a much higher test for Ricardo Da Rocha’s men. But with Shafiu on fire, any team can be extinguished.