Villareal 2-2 Real Madrid: Gareth Bale scores and gets sent off in draw 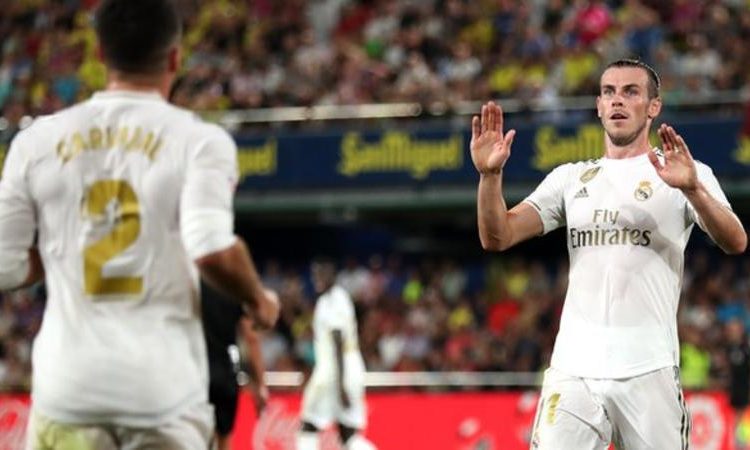 Gareth Bale (right) becomes only the second Real Madrid player, after Cristiano Ronaldo, to score a La Liga double and be sent off in the same match this century (Image credit: Getty Images)

Gareth Bale was sent off in stoppage time after scoring two goals to rescue a point for Real Madrid against Villarreal in La Liga.

Bale, who seemed set to leave Madrid this summer, was shown both yellow cards in stoppage time after ending his 169-day league scoring drought.

Villarreal had taken an early lead through Gerard Moreno but Bale opened his account on the stroke of half-time.

Moi Gomez put the hosts back in front but Bale hit a late equaliser.

The visitors grew into the game and equalised on the stroke of half time when Bale scored his first league goal since manager Zinedine Zidane said “it would be best for everyone” if the forward left the club.

Madrid were dominant after the interval and Toni Kroos was denied by a brilliant double save by Andres Fernandez before Karim Benzema’s effort was ruled out for offside.

Gomez appeared to have scored a close-range winner against the run of play after Moreno’s shot was parried by Courtois, only for Javier Ontiveros to send the ball back across goal for the midfielder to tap in.

But Bale salvaged a point for his side when he cut in on his left to drive the ball past Fernandez before picking up his first booking for an indiscretion in the 92nd minute.

With the clock ticking down, Bale was shown his second yellow for a high boot two minutes after his first.

The Welshman becomes only the second Madrid player, after Cristiano Ronaldo, to score a La Liga double and be sent off in the same match this century.

The result sees Madrid climb to fifth in the La Liga table, while Villarreal move to 16th.