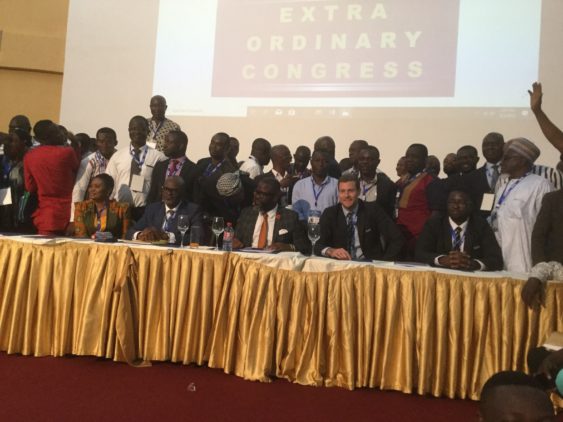 Those who are interested in the position will now wait for a date to be announced so that they can pick up forms, fill them, get the necessary signatures and support and file those forms and papers.

So far, several people including former GFA officials, Wilfred Osei and George Afriyie, have stated their interest in replacing Kwesi Nyantakyi. Other individuals like Kurt Okraku, Dreams FC CEO and Asante Kotoko CEO, Kwame Kyei, have all said they would like to run Ghana football for at least the next four years.

So how do I become GFA President?

First of all, you must be affiliated to a club in the Ghana Football ecosystem to even get in the door before dealing with the fine print in the statutes.

The draft statutes of the GFA, which were approved by the clubs at the Extraordinary Congress, state that anyone interested in the position must be a Ghanaian and must be of sound mind and “has not been detained as a person of mental disorder under any enactment.”

What about my academics?

One will need to have a first degree from a reputable university.

What about if I do not have such a degree?

If you have 7 years working experience in Sports Administration, you are good to go. In addition, having some good knowledge of rules and regulations that govern the Ghana FA, CAF and FIFA will certainly be very helpful.

You must have also have very good practical experience in Management, Administration, Finance, or Corporate Governance. Running any entity will require these and the football association is no different body or association or company, if you choose to go by what the GFA is in the Registrar General’s records.

What about my conduct?

After the incidents of the Anas “Number 12” documentary which looked at corruption in Ghana football, it is not surprising that the Normalisation Committee has highlighted the need for the next GFA President to be one that will not stain the position or bring the local game into disrepute.

Thus, if you want to be the next GFA boss, you should not “have been convicted of an offence involving fraud, dishonesty or moral turpitude” and you must be of “high moral integrity.”

No. After meeting all the above-stated requirements, you will face an integrity check and it is mandatory. All candidates are to  subject themselves to these checks and you will fail:

-if you refuse to do so or you have been given a criminal conviction or disciplinary sanction by a state court;

-if you have been found guilty by an Ethics Committee of the GFA, CAF or FIFA, a Commission of Enquiry  in Sports Administration or any sporting body with a sanction that affects how you will work as the GFA boss.

If you make it through all these processes, congratulations. You are now part of the race to become the next Ghana FA boss.

So I win the elections. How long will be in office for?

Per the new statutes that were approved at the Extraordinary Congress, you will serve for only two terms of four years each.

That decision marked the end of the unlimited tenure rule that was in existence in the previous administration.

Finally, when is the election?

Even though there is no official date, the expectations are that the polls will take place later this month.

The Normalisation Committee will have to end its tenure by September 30 and so, the elections must come off before then.

BETMYWAY: MY Betway Picks of the week