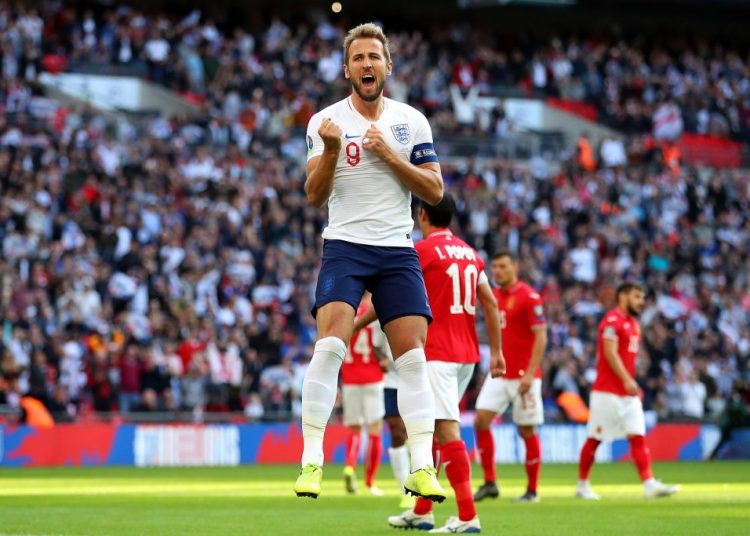 England notched a 4-0 win over Bulgaria on Saturday as a hat-trick from captain Harry Kane secured all three points in their Euro 2020 qualifier.

But Gareth Southgate’s side were made to work for the win against a stubborn defence, who were content to sit deep and soak up pressure at Wembley early on.

Raheem Sterling also got in on the act in the second half, bagging his sixth goal in qualifying, with the challenge of Kosovo up next on Tuesday.

The Three Lions, who dominated possession against a compact Bulgaria defence, thought they had made the breakthrough in the 18th minute but the offside flag denied them.

Sterling broke clear down the right and centred for Harry Kane, but the skipper had strayed ahead of the last defender.

There was no denying the Spurs striker five minutes later though, as the Tottenham man drilled home from close range after more fine work from Man City’s star winger.

Sterling pressed the Bulgaria defence from a short goal-kick and teed up Kane, who made no mistake from six yards to put England 1-0 up.

That proved the only moment of joy for England in front of goal in the first half as they went in for half-time with a single-goal advantage.

Bulgaria threatened an equaliser soon after the restart, but it was England that extended their lead as Kane scored again.

Marcus Rashford advanced down the left and was tripped in the box by Nikolay Bodurov, with the number nine smashing home the resulting penalty for his 24th international goal.

Southgate’s men began to stretch their legs and went further in front in the 54th minute, Kane turned provider this time as he centred for Sterling to bundle home from a yard out.

He’d find the net once more soon after though, winning and converting a second penalty on 73 minutes.

Chelsea’s Mason Mount came on as a second-half substitute to make his England debut, with Dortmund’s Jadon Sancho also getting minutes.

England, boosted by their young arrivals, saw out the game and picked up the three points needed to return to the top of their Euro 2020 qualifying group.