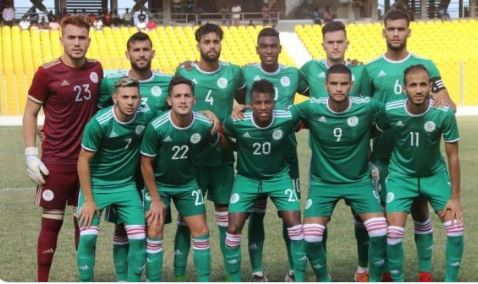 With a 1-1 result in the first leg, most Algerian fans believed that a victory or at least, keeping the score that way was going to be possible for the Young Foxes to make it to the U-23 AFCON tournament in Egypt and fight for a spot in the 2020 Tokyo Olympic Games football tournament.

However, that was not be as they lost 1-0 to Ghana in Setif and missed the boat to Egypt.

So why did things not work out?

Algerian football journalist, Walid Bylka, who writes for Algerian football portal, DZ Foot (@dzfoot on Twitter), admitted that the team did not operate at the right levels needed for such a crucial game.

He shared his thoughts via a voice recording that was posted by DZ Foot’s Twitter handle.

“It was a very disappointing result to lose at home and get eliminated on home soil especially after the way we played in the first leg in Ghana to get the 1-1 draw.

It is very disappointing that this generation of players, who are a talented group, will not get to play in the African Cup of Nations and potentially, in the Olympics.

But we created some chances and did not score. The truth, though, is that we did not play well. The performance looked disjointed and the players looked like they were on different pages.

Credit to Ghana though.They were very solid defensively. It looked like they came with a plan and they executed and they looked much better than they did in the first leg. Congrats to them and I wish them the very best.”

What about the fans?

The supporters were not happy with the team’s output and they expressed their frustrations on social media.

One fan admitted that that team was not good enough on the night.

Another fan was of the opinion that a lack of preparation was the cause of the result.

His tweet in French said: ” It is a really a pity that they did not prepare for such an important match.”

Others chose the more philosophical route and saw the result as a learning curve for the team as part of their growth as players.

One tweet in French said: “It is not the end. These players will learn from the defeat. They know where the game was lost. They will make progress.”

Another tweet in French said: “Let us hope that this loss will turn out eventually for good.”