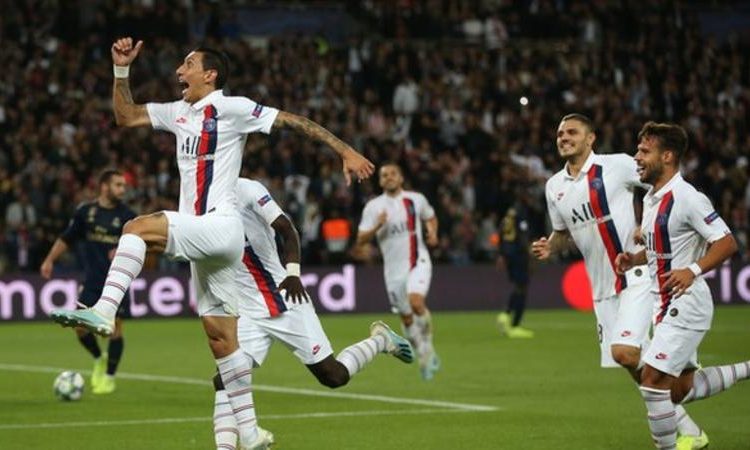 Angel Di Maria is only the second player in Champions League history to score twice against both Real Madrid and Barcelona, after Mario Jardel (Image credit: Getty Images)

Thomas Meunier’s stoppage-time goal added more embarrassment for the Spanish giants – and heightened the pressure on Real manager Zinedine Zidane, whose win ratio is below 50% since returning to the club towards the end of last season.

Eden Hazard, making his first start for the visitors, showed some nice touches but struggled to influence proceedings, as a Real old boy stole the show.

Celebrating his 100th appearance in the competition, Di Maria opened the scoring with a close-range shot that crept inside Thibaut Courtois’ near post from Juan Bernat’s pass.

While Real’s Belgian goalkeeper Courtois appeared to be caught out for the opening goal, he could do nothing to prevent the second.

Idrissa Gueye’s fine work on the right created the opening for Di Maria, who found the bottom right corner superbly with a curling effort from 20 yards.

Hopes of a Real fight-back were briefly raised when Gareth Bale lobbed the ball magnificently over home keeper Keylor Navas from the edge of the penalty area.

However, his goal was ruled out for handball by referee Anthony Taylor after it was reviewed by video assistant referee (VAR) officials, as was Karim Benzema’s offside effort late in the second period.

And a miserable night for Real and Zidane was compounded as Juan Bernat and Meunier, strolled through the visiting defence before Belgian full-back Meunier placed the ball into the bottom right corner.

It confirmed that PSG, who were without their entire first-choice strike force of Neymar, Edinson Cavani and Kylian Mbappe, halted a run of three consecutive defeats against the Spanish club.