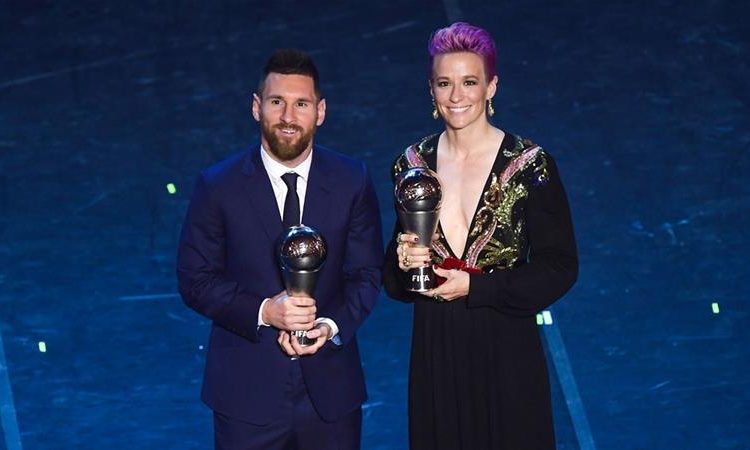 On Monday night, Lionel Messi and Megan Rapinoe were crowned the Best Men’s and Women’s Players respectively for their achievements in 2018.

They held off competition from the likes of Cristiano Ronaldo and Alex Morgan to pick up their awards.

As it is the norm, captains, coaches and selected media men and women from all of FIFA’s member countries, including Ghana, had the chance to cast their votes in determining the world’s best footballers and coaches and after the ceremony, FIFA published the voting results.

The votes revealed that for the Men’s awards for the Best Player and Best Coach, Black Stars captain, Andre Ayew voted for Cristiano Ronaldo in first place, Lionel Messi in second and Eden Hazard in 3rd place while he also went for France head coach, Didier Deschamps as his top pick for Best Coach. Jurgen Klopp and Mauricio Pochettino were his second and third picks respectively in that category.

With the media votes, William Ezah of the Ghana News Agency, went for Sadio Mane, Eden Hazard and Virgil Van Dijk in that order as his picks for the Best Men’s Player while he went with Jurgen Klopp, Pep Guardiola and Fernando Santos in that order for the Best Coach Award.

And who did Ghana vote for in the women’s category?

Well, Black Queens captain, Portia Boakye,chose England’s Lucy Bronze as her top pick for the Best Women’s Player. She then went for Norway’s Ada Hegerberg and Wendie Renard of France as her second and third picks. For the Best Coach award, she went for Jill Ellis, Peter Gerdhasson and Phil Neville.

Black Queens head coach, Mercy Tagoe-Quarcoo, also voted for Lucy Bronze in top place in terms of the Best Women’s Player while Ada Hegerberg of Norway and Rose Lavelle of the USA got her second and third-placed votes respectively. For the Best Women’s Coach award, Tagoe chose Japan’s Ikeda Futoshi and Pedros Reynald who is ex-Lyon women’s team head coach in that order.

So how did the voting go eventually?

For the Best Men’s Player, Messi had a total of 46 percent of total votes cast while Van Dijk and Ronaldo received 38 and 36 percent respectively of the total votes.

In the Best Women’s player category, Rapinoe, Morgan and Bronze polled 46 percent, 42 percent and 29 percent respectively of the total votes.

For the Best Men’s Coach, Jurgen Klopp, Pep Guardiola and Mauricio Pochettino had 48, 38, and 27 percent of the total votes while Jills Ellis, Sarina Wiegman and Phil Neville had 48, 40 and 31 percent respectively of the total votes cast.