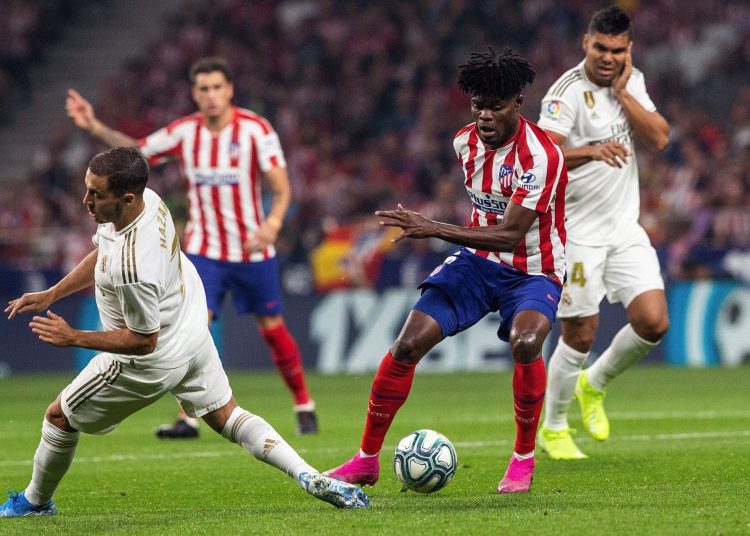 Thomas Partey might be a household name in Ghana and Spain now after great displays over the years for the Black Stars and his club side Atletico Madrid, however, in the ‘best league in the Universe’, the fans have taken a while to catch up.

The imposing midfielder has taken the world by storm in recent months, and has come to the notice of many fans of Premier League who tweet daily, practically begging their sides to sign the Ghanaian midfielder.

Partey’s dominant performance for Atletico in the Madrid derby over the weekend was the cherry on top of a very appealing cake that has sent fans of Manchester United, Arsenal and even some Chelsea supporters into a frenzy.

While a number praised him for his control over the midfield in the 0-0 draw with Real, many more dreamed about how much more impressive their sides will be with the Ghanaian at the heart of their midfield. 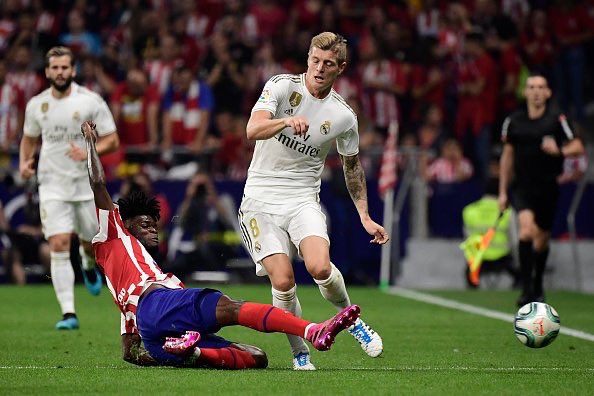 A few of them even went as far as to suggest that Partey was the difference between another season of disappointment and the Premier League title.

Partey-Guendouzi-Willock needed at my club.

Arsenal 4 signings away from the title.

Thomas Partey is quality. Armchair football analysts don’t rate him because he doesn’t get so many assists

Just want Thomas Partey at United, is that too much to ask #MUFC pic.twitter.com/jkyV8atynI

Partey has a €40m release clause and Juve, PSG, Bayern & the top 6 in England didn’t try to get him.

Thomas Partey doing EVERYTHING Man United want from Pogba. But without the unnecessary tricks and flicks.

You love to see it.

We could have got Partey for £43.5m. Unfortunately our transfer policy is Brexit only.

Thomas Partey would’ve been a perfect Ander Herrera replacement but he doesn’t have the DNA.

I don’t know why Thomas Partey hardly gets talked about amongst the world’s best defensive midfielders. Even against Juve, he was doing everything so well, from winning numerous, balls to distributing really nicely.

Partey is someone Manchester United should have gone for. He is a solid defensive midfielder and can also operate in centre midfield. He is excellent in duels and wins multiple possessions per game.

He is an excellent player (mid to upper tier). https://t.co/cbEkJOQBME

If Chelsea will be looking to sign a DM then Thomas Partey should be the man.

The most versatile midfielder Ghana have produced since Essien and got all the qualities you’ll need from a midfielder.

He has €40m release clause.

‘Best in the world’

Partey’s performance attracted more than just fans of the Premier League, as he earned praise from all over.

Not only is Thomas Partey the best African midfielder at the moment, he’s also one of the best midfielders in Europe right now.

Don’t like overrated/underrated tags, but Thomas Partey must be the most underrated player at a top club. Clearly Atleti’s best passer on the ground. Every 10-20 yard pass is clean and goes forward.

Even Barcelona fans couldn’t help but express their admiration for Partey.

Despite scoring a goal, Partey was not his usual impressive self at this year’s African Cup Of Nations.

Some fans of the Black Stars, while admitting Partey was excellent for Atletico, questioned why he didn’t show this form at the AFCON.

On a real,if Thomas Partey replicates half the performance at Atletico to the Black Stars,we would have won the Afcon wallahi

@OtiAdjei it seems @Thomaspartey22 of At Madrid is a different animal to Partey of Black Stars …My small observation …Pass accuracy,tenacity,eye for pass etc ….Chale everything different

Others feel Partey is limited by the players he takes to the field with for the national team.

The player himself is clearly not letting things get to his head, which might be the most impressive thing about him.

Despite the massive levels of praise, he’s remaining grounded and focused on the next game.