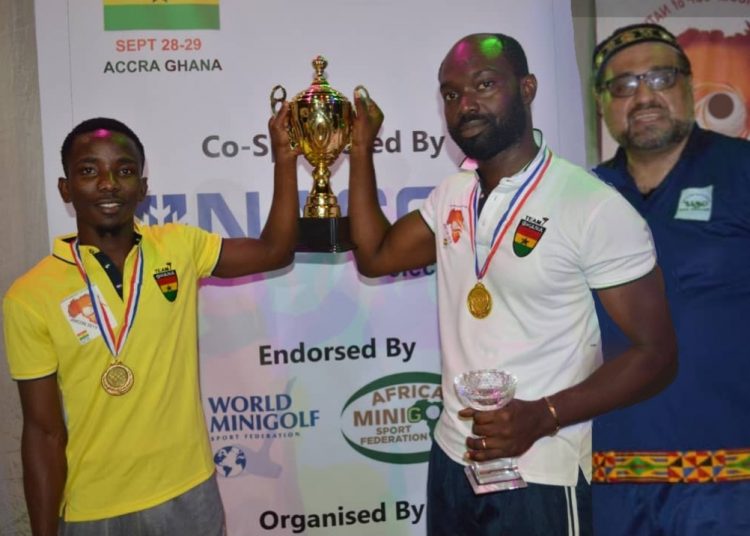 Team Ghana cut a piece of Minigolf sporting history as winners of the maiden 2019 African Minigolf Cup of Nations (AMCON) which ended in Accra last Sunday.

It was a competitive two-day affair at the Ghana Minigolf Federation 18-hole world championship course as Ghana faced stiff competition from 11 African countries for prizes and bragging rights.

Organised by the Ghana Minigolf Federation (GMF) and African Minigolf Federation, under the stewardship of Mr Talal Fattal, the competition featured 48 players, including 10 females, with hosts Ghana presenting Five teams of which two dropped out at the Quarter Finals knockout phase.

In the end the Ghanaian duo of Enock Nyarko and Solomon Lokko scored 82, with six (6) holes in one to finish as winners of AMCON 2019 last Sunday.

Gabon, who presented four teams, finished as first runners-up with the pair of Ruben Minko and Olsen Madama Christ Junior edging out team Ghana pair Kelvin Boateng and Bright Frimpong to third place with a score of 83.

The Somasse brothers from Benin, Arthur and Brun, finished in fourth position with a score of 86 after three rounds of playoff work with team Ghana 3 on hole 14 during the semi finals.

The Ghanaian winners were presented with medals, trophy and a cash prize of GHc3000 donated from Ghana Minigolf Federation with products from NASCO.

Another winner on Sunday was Guinean Barry Amadou who won the Most Hole-in-One prize with 24 hole-in-one.

After the competition, the winning Ghanaian pair Enock & Solomon expressed their excitement at their achievement & turned their attention to the global competition which comes off in China end of this month.

“We are so happy to win this tournament because we have put a lot of time and energy preparing for it. It wasn’t easy scoring low but with hard work, we were able to team up and do it. It was really tough at the last stages as all eyes and attention was on us. It would’ve been a shame if Ghana didn’t win it. Now we have to prepare for the World Minigolf Federation’s Championships in China,” said an excited Nyarko.

The tournament was also used to launch the Ghana Wheelchair Minigolf Association, with its General Secretary, Wilson Agbesi, pledging to work hand in hand with the GMF to train their players for future local and international competitions.

At the short closing ceremony, Madam Adiza Ibrahim, Marketing Manager Electroland Ghana Ltd, co-sponsor of the tourney promised more sponsorship packages for the GMF, should they continue to impress.

“We at NASCO are happy to associate with this tournament and the Ghana Minigolf Federation. Our relationship will grow stronger and there are more goodies for minigolf due to the very competitive tournament you have had. We say congrats to all the winners,” she said.