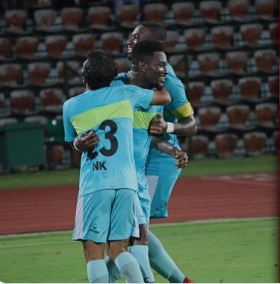 Ghana forward, Asamoah Gyan, scored his first goal for NorthEast United, as they drew 1-1 in a friendly with the Indian national team played on Wednesday at the Sarusajai stadium, Guwahati.

Gyan joined the team in September on a free transfer after his contract with Turkish side, Kayserispor, came to an end.

The match was used by the two teams to gauge the level of readiness for respective future assignments with NorthEast United getting ready for the 2019 Indian Super League campaign and the Indian national team getting in shape ahead of the 2022 World Cup qualifiers.

Gyan scored in the 44th minute to level the score after Sunil Cheetri scored for the Indian national team in the 34th minute.

NorthEast United FC will start their Indian Super League campaign on the 21st of October against Bengaluru.