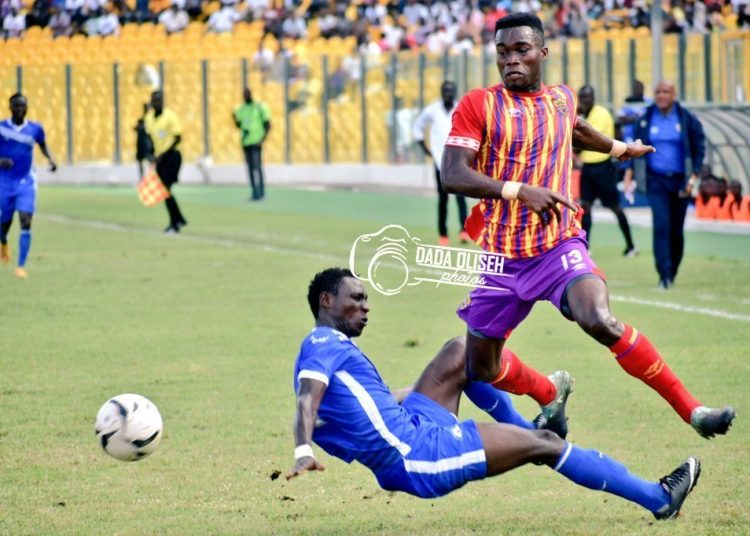 Accra Hearts of Oak and Accra Great Olympics displayed a master class soccer to the fans of Accra but failed to break each other to set another showpiece in the 2019 Homowo cup.

Accra Hearts of Oak opened the game with an effort to break the back of the dade boys, a grounding shot from Obeng Jr met the waiting hands of Goalkeeper in post for Olympics in the early minutes.

Great Olympics came into the game strongly after the early exchanges but seemed to enjoy possessing of the ball than playing to score, while the Phobians continued to probe for the opener.

Kojo Obeng Jr came close to scoring again in the 15th minute with a sitter after a fine work out by Kofi Kordzi, but missed narrowly.

Accra Hearts of Oak continued to dominate play into the half hour mark, with Kofi Kordzi displaying some good foot works in the goal area of the opponent, but could not count any goal.

Great Olympics came to the game in the 40th minute with a strike from Ahmed Tijani, a shot that was saved by Richmond Ayi in post for Hearts of Oak.

Before the referee will blow his whistle for the break, Kofi Kordzi produced a Thunderbolt shot towards goal, but Goalkeeper Stephen Osei produced a master class save to deny him goal to bring the first half to an end.

Both teams started the second half on a slow note, working the flanks to break the back of each other, with no real test on goal.

Hearts of Oak improved in their game after making two substitutions with Obeng Jr, and Charles MacCarthy coming off for Abubakar Traore, and Aminu Alhassan.

In the 84th minute, Hearts came close again but Stephen Odei produced another super save to deny them goal.

Both teams fought for the winner, but could not bringing the game to an end.

The ceremonial kick off was performed by Nii Olemre, the Akwashong chief of Ga State and Asere mantse in the company of former mayor of Accra, hon. Oko Vanderpuye, the MP for Odododiodio and former sports minister Nii Lantey Vanderpuye, and some chiefs from the GA area.