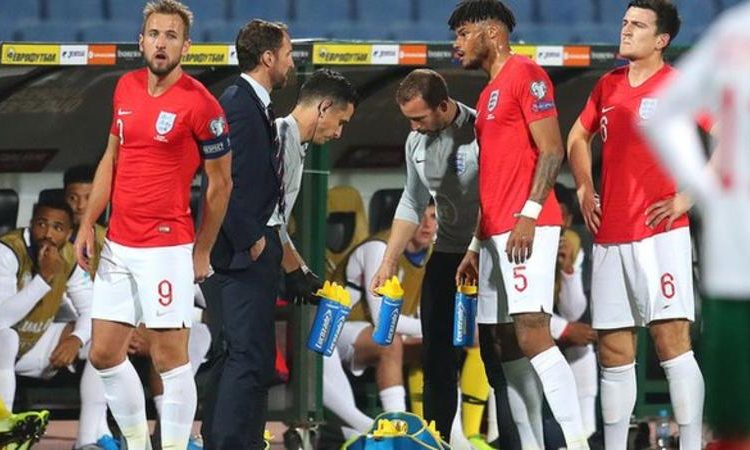 There were two halts in play in the first half due to incidents of racist abuse (Image credit: Getty Images)

England’s Euro 2020 qualifying victory over Bulgaria in Sofia was overshadowed by shameful scenes of racism that saw the game stopped twice and officials threaten to abandon the match.

Gareth Southgate’s side strolled to a 6-0 victory in an atmosphere that was toxic in the first half and eerie in the second, with a large section of the Vasil Levski Stadium already closed after racist incidents here in June.

England debutant Tyrone Mings was an early victim, turning towards the home fans when chants were aimed in his direction and referee Ivan Bebek stopped the game in the 28th minute after Raheem Sterling was a target for further abuse.

After lengthy discussions, and in accordance with Uefa’s protocol for dealing with racism, the crowd were warned of the consequences if there were further problems – and there was a further stoppage just before half-time.

On the pitch, England moved closer to Euro 2020 qualification as they romped to victory with the recalled Marcus Rashford opening the scoring early on with a superb rising drive.

Ross Barkley added a tap-in and a head from Kieran Trippier’s cross before Sterling got on the scoresheet with another simple finish just before half-time.

And Sterling provided an even more emphatic answer to those who directed the shameful chants at England’s players when he strode through for the fifth goal after 68 minutes.

The issue of racism provided a disturbing backdrop to this game and it was only a matter of minutes before England’s worst fears were realised.

Mings was clearly perturbed by chanting, a sorry state of affairs for the 26-year-old who should have been savouring the greatest moment of his career by winning his first England cap.

When England manager Gareth Southgate, captain Harry Kane and several players gathered near the touchline before half-time after more audible abuse, it looked as if the game may be abandoned but it swiftly resumed.

A large group of black-clad supporters, some of whom were making right-wing salutes, were moved from an area behind the dugout and Bulgaria captain Ivelin Popov went into that part of the stadium while the teams walked off at half-time to plead with supporters.

The atmosphere, not to mention the one-sided scoreline, was almost surreal in the second half with the Bulgarian players seemingly demoralised and dispirited themselves by the shocking events of the night.