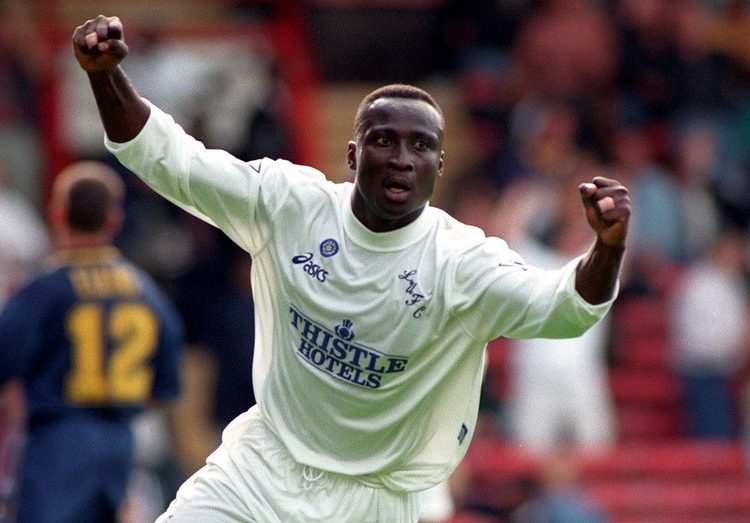 A legend, a hero and one of Ghana’s greatest ever footballers in the 20th century, Anthony Yeboah dazzled fans everywhere he played.

Tony Yeboah, on 21st August 1995, broke the hearts of Liverpool fans as he hit a thunderous volley past keeper David James.

Yeboah’s powerful volley in the 51st minute took his tally to 16 goals in 18 starts for Leeds United and helped his side maintain a 100% record in the league at the time.

The former Ghanaian striker joined Leeds United for £3.4m from Eintracht Frankfurt in the summer of 1995.

The goal poacher scored 24 goals in 47 appearances in his time at Elland Road in his time with The Whites.

Before joining Leeds United, Tony Yeboah made a name for himself in Germany where he played for Eintracht Frankfurt and FC Saarbrücken.

However, it was at Frankfurt where he gained more international recognition, playing 123 games and scoring 68 goals across all competitions.

The ex-Black Stars striker started his career at Kumasi Asante Kotoko, then moved to Cornerstones in Kumasi for two years between 1983 and 1985.

He then played for Okwahu United for a year before joining FC Saarbrücken in 1988, where he was one of the first black players to play in the German Bundesliga.

After impressing at Saarbrücken, Eintracht Frankfurt priced him away from the club.

From been booed by home fans to club captain, Tony Yeboah distinguished himself as a prolific goal poacher for the Bundesliga club.

He left Germany to England, playing for Leeds United and then moved back to Germany, joining Hamburger SV after a two-successful-year stint in the Premier League.

He finally hanged his boots whilst playing for the Qatari club, Al-Gharafa Sports Club.

Tony Yeboah was a member of the Black Stars team, playing in three Africa Cup of Nations.

He is Ghana’s third-leading goalscorer in the senior national team with 29 goals in 59 appearances.