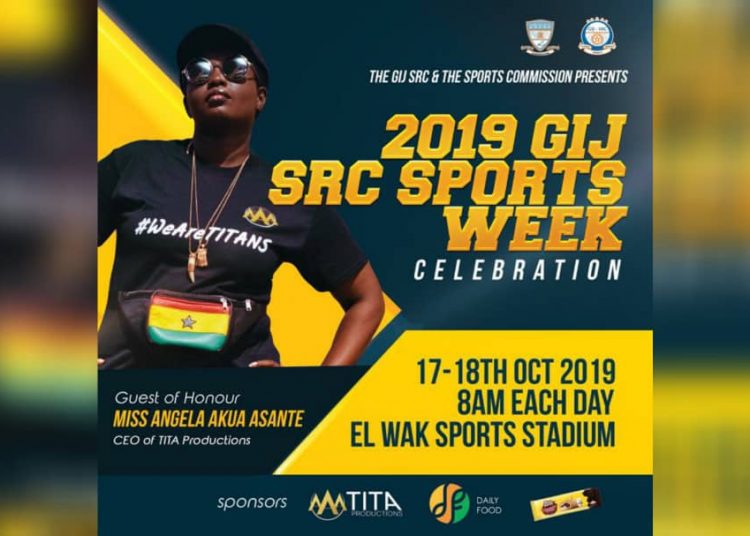 11
SHARES
1
VIEWS
Share on FacebookShare on TwitterShare via Whatsapp

The deal, worth 2,000 GHS in cash prizes and administrative support and over 1,000 GHS in merchandise, is the first sponsorship package of this kind in the history of the annual event which regroups male and female students to compete in sports events.

This year’s celebration takes place on Thursday, October 17th and Friday, October 18th at El Wak Sports Stadium from 8:00 AM to 6:00 PM on both days. Entrance is free and the public is cordially invited to witness some of the nation’s future brilliant media professionals battling it out on the track and field.

The guest of honor is Under-30 entrepreneur and TITA Productions founder, Angela Akua Asante also known as Triple A, whose recent short documentary “We Are TITANS” urges Ghana’s sports media administration to prioritize youth development funding for young journalists in the country.

“The sponsorship package we have received from Miss Asante and her organization, TITA Productions, is one that we believe will motivate our sportsmen and women to do more.

“In recent years, she has been quite responsive to initiatives that are beneficial to the development of sports at the Ghana Institute of Journalism.

“We are once again thrilled to have her on board for this historic sports week celebration and it is our hope that this partnership will last for as long as possible. We wish her the very best in all her endeavors and we hope to see her at El Wak, come Friday.”

Meanwhile, Angela Akua Asante has confirmed her attendance on the final day of the week-long celebration on Friday, October 18th. The international football journalist, whose company is named after the acronym (TITA) of her tagline “This Is Triple A”, is expected to offer a midday address to the crowd. She noted:

“I’m excited to grace the final day of the 2019 GIJ Sports Week Celebration as a Guest of Honor and sponsor. I look forward to witnessing fierce battles and I congratulate the winners in advance.

“Even those that won’t win would still be winners because trying in itself is a commendable act. I want to see both the Men’s and Women’s athletes looking all serious about what the GIJ Sports Week is about: channeling our inner warrior because We Are TITANS!”

As the special guest, Triple A will kick off the Women’s Football tournament at 2:00 PM with a penalty strike. Whether the ball will go in or not is one thing to find out on Friday. In the presence of her mother, AAA will then take part in the medals and trophy presentation at 5:00 PM as the event comes to a conclusion.

Independent media production company TITA Productions is sponsoring the Men’s and Women’s awards of two distinct categories: football and 100 meters races. Each of the four winners of the four awards will be offered a 300 GHS cash prize in addition to TITA merchandise whilst the first and second runners-up in the athletics categories will share branded AAA/TITA caps and “#WeAreTITANS” t-shirts.

Angela Akua Asante, who was Ghana’s only reporter to travel and cover the biggest ever FIFA Women’s World Cup in history (France 2019), explained:

“Of course, 300 GHS is a small token but, symbolically, I’m offering both the Men’s and Women’s awards winners the same amount to underline the importance of gender equality and equal pay.”

The awards in the football and 100 meters race competitions, sponsored by TITA Productions, have been renamed as follows:

State of the Art industrial bakery, Daily Food Ltd and Boss Baker, are the other two sponsors on board alongside TITA Productions for the 2019 GIJ Sports Week Celebration.