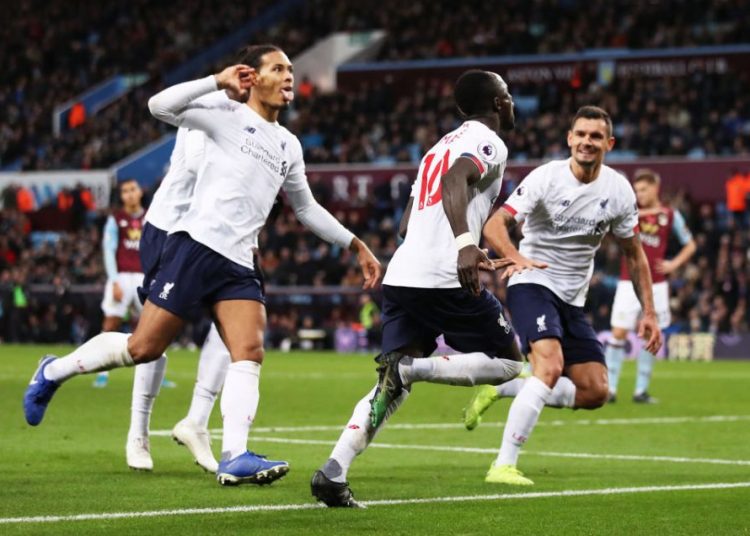 It looked like it wasn’t the Reds’ day after Trezeguet opened the scoring and Roberto Firmino’s strike was ruled out for an exceptionally marginal offside call.

But Liverpool did eventually get through the Villans’ resolute defense when Robertson headed Mane’s brilliant cross from the right beyond Tom Heaton.

A point looked on the cards but in the fourth minute of stoppage-time, Mane got on the end of Trent Alexander-Arnold’s corner and expertly guided his header into the corner of the net to send the traveling Kopites wild.

Reigning champions Manchester City kept in touch with the leaders through after they came from behind to win 2-1 at home to Southampton.

Pep Guardiola’s side leveled the scores 20 minutes from time through the ever-dependable Sergio Aguero and found the winner when Kyle Walker smashed the ball home after Alex McCarthy failed to clear a corner from the left.

Elsewhere, Arsenal drew 1-1 at home to Wolves in a game that saw captain Granit Xhaka left out of the Gunners’ squad.

Pierre-Emerick Aubameyang gave the Gunners the lead but Nuno Espirito Santo’s men hit back with a goal from Raul Jimenez.

In the lunchtime game, Manchester United was beaten 1-0 at Bournemouth – former Red Devil Josh King scoring the only goal of the game.

Below you can see the results from  Saturday’s Premier League action so far.