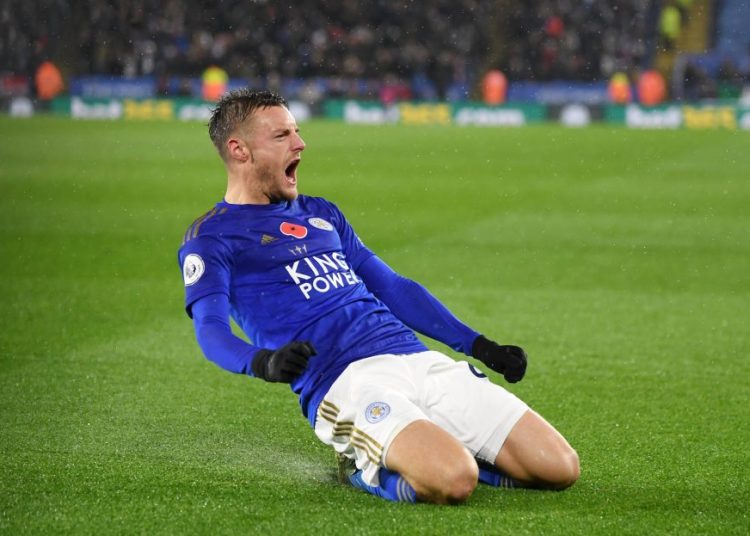 Leicester did their top-four chances no harm whatsoever with a comfortable 2-0 win over Arsenal at the King Power Stadium.

Neither side could be separated at half time but the Foxes outclassed their opponents after the break.

Vardy then turned provider to set up James Maddison, who drilled in the second to give Brendan Rodgers’ men a deserved three points.

The result puts Leicester second in the Premier League – although Liverpool and Manchester City will play each other on Sunday – while Arsenal is a huge eight points off the Champions League spots.

Has Leicester been such over-whelming favourites to beat Arsenal? In recent memory, probably not.

But the hosts got off to a slightly timid start with the onus clearly on them to win but Gunners midfielder Matteo Guendouzi was given a huge let-off when Caglar Soyuncu was tugged down in the box – neither the referee nor VAR giving a penalty.

In fact, the only real clear-cut chance of the first half fell to the away side with Alexandre Lacazette curling the ball just wide after receiving the ball from strike partner Pierre-Emerick Aubameyang.

But whatever Rodgers said to his players at half time clearly had the desired effect as Leicester simply had too much for this fragile group of Arsenal players.

Wilfred Ndidi should have opened the scoring but his left-footed effort crashed against the bar.

Arsenal did actually have the ball in the net when Aubameyang got on the end of Sead Kolasinac’s low cross but the new Gunners captain was offside and the goal was rightly chalked off.