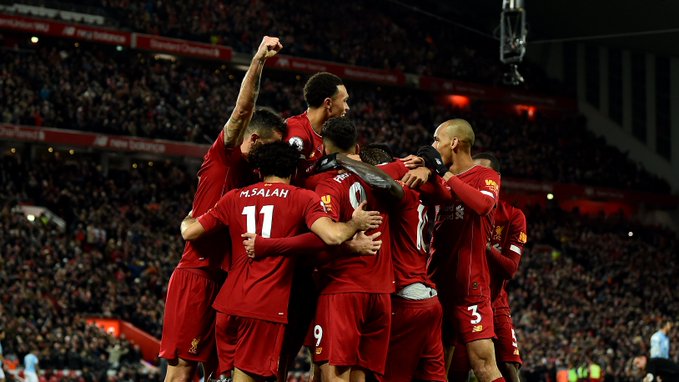 Liverpool extended their lead at the top of the Premier League with a 3-1 win over Manchester City in a thrilling clash at Anfield.

Goals from Fabinho, Mohamed Salah and Sadio Mane saw the Reds race to a three goal lead before having to endure a nervy last 10 minutes when Bernardo Silva got one back.

City find themselves in fourth place behind Leicester and Chelsea with Liverpool eight points clear of the chasing pack.

Liverpool manager Jurgen Klopp went with his tried-and-tested big-game line-up for the visit of Manchester City.

That meant four changes from the Champions League win over Genk with Andy Robertson returning at left-back, Jordan Henderson coming back into midfield and Roberto Firmino and Sadio Mane rejoining the forward line.

City made six changes as Claudio Bravo started in goal for the injured Ederson with three of the back four from Wednesday’s Champions League draw against Atalanta altered.

John Stones was picked to partner Fernandinho in the centre of defence with Kyle Walker and Angelino, who was making only his second Premier League start.

Rodrigo came into midfield with Sergio Aguero preferred up front to Gabriel Jesus.

Liverpool took the lead just six minutes into the match with a superb Fabinho goal but it was not without another VAR controversy.

The City players were convinced Trent Alexander-Arnold had handled in his own box and wanted a penalty.

Michael Oliver waved away their appeals and within 30 seconds the Reds had scored with the Brazilian’s piledriver beating Bravo.

Angelino had a shot deflected onto the post as City looked for a way back into the game.

Aguero flashed a shot wide and another straight at Alisson Becker as City went into the interval 2-0 down.

Liverpool netted a third just six minutes after half-time, with Bravo failing to keep out Mane’s header at the back post from Henderson’s cross.

Bernardo Silva gave the visitors a glimmer of hope when he got a goal back with 12 minutes to go to make it a nervy finish for the Reds.