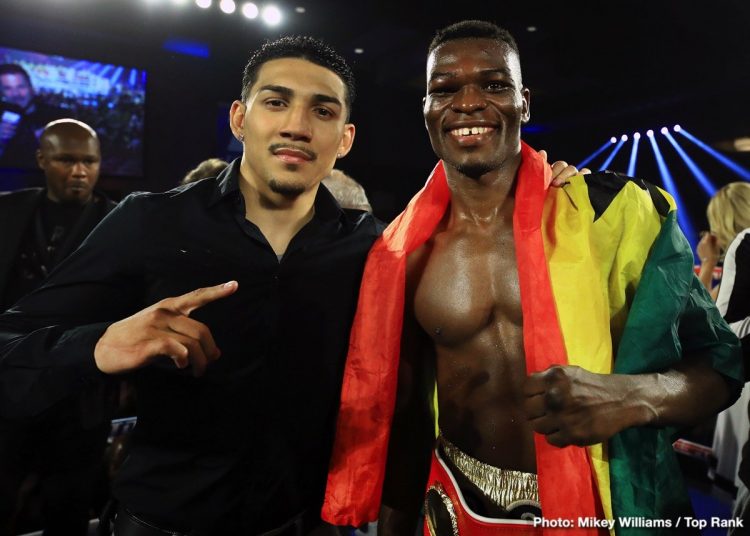 American-Honduran lightweight boxer, Teofimo Lopez, has revealed that his wife, Cynthia, was the force behind his decision to take on Ghana’s Richard Commey in their upcoming showdown in New York on December 14.

The bout will see Commey putting his IBF Lightweight title on the line and what is at stake for the two boxers is a chance to face Vasyl Lomachenko who holds the WBA, WBO, WBC and The Ring magazine titles.

There were so many doubts over the Lopez-Commey bout and in several interviews, Lopez had stated that some personal issues with his family could force him to walk away from the bout but it seems Lopez’s wife saved the day for all boxing fans and he revealed this in an interview with Compubox TV.

“My wife pretty much encouraged me to take the bout. She told me that when there were tough times, I had to push harder. She reminded me that I was never a quitter and I knew I was not a quitter.

After my bout with Takatani, I was going through a tough time and she was there to pick me up.”

Lopez also spoke on the mutual respect between himself and Richard Commey and said that while he was an admirer of Commey’s abilities, he would go all out to achieve his aim on the night of December 14 in New York.

“Commey and I have to do what we have to do. In the ting, we have to slug it out. I know he will be in top shape and he will bring his A-game and he needs to do so. I respect him outside the ring but in the ring, there will be no respect.”

The fight is part of ESPN’s coverage of the Terence Crawford-Egis Kavaliauskas WBO Lightweight bout.