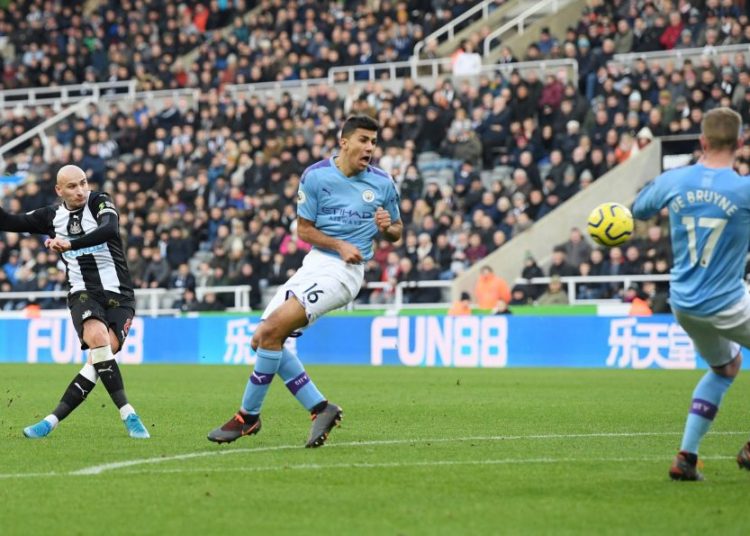 Two stunning goals in the last ten minutes saw two points dropped for Manchester City as they were held to a 2-2 draw at Newcastle.

With the scores level, Kevin De Bruyne thought he had won the game with an unbelievable volley, only to be matched by Jonjo Shelvey just six minutes later.

The Magpies captain curled a beautiful strike into the bottom corner to cancel out De Bruyne’s goal of the season contender as Steve Bruce’s men took more points off the ‘Big Six’.

It was no less than they deserved, with City alarmingly below their best, and not for the first time this season.

Liverpool now has the chance to extend the gap to 11 points if they beat Brighton at Anfield later this afternoon.

Despite their sluggish start, City did take the lead through Raheem Sterling, only for Jetro Willems to respond for the hosts three minutes later.

David Silva back-heeled the ball into the path of Sterling after it had ricocheted back to him from Isaac Hayden’s challenge and England forward blasted home from close range.

Newcastle was level when Willems – whose only other Newcastle goal came against Liverpool – played a one-two with Miguel Almiron before thumping a low right-foot drive past Ederson. It was the Paraguay international’s first assist since his £21million arrival in January.

Dubravka needed two attempts to claim Sterling’s rising 33rd-minute strike and was relieved to see De Bruyne’s stoppage-time effort deflected into his waiting arms as the Magpies made it to the break on level terms.

Federico Fernandez’s barnstorming run from his own penalty area sparked a rare Newcastle counter-attack which saw Shelvey send a 54th-minute free-kick just wide after Fernandinho had barged Joelinton to the ground 30 yards out.

Javier Manquillo had to produce a last-ditch tackle to deny Gabriel Jesus after De Bruyne and Sterling had picked a path through in the 65th minute, and Dubravka had to turn away a dangerous De Bruyne cross seconds later.

The Slovakia international pulled off a fine 68th-minute double save to deny Jesus and De Bruyne and saw substitute Bernardo Silva drag a left-foot shot wide four minutes later with the pressure mounting.

However, he was powerless to resist when De Bruyne pounced after Mendy’s cross had been half-cleared, chesting the ball down before firing home off the underside of the crossbar.

But there was to be a further twist when, with three minutes remaining, substitute Christian Atsu played a free-kick square to Shelvey, who sent a sumptuous curling effort beyond Ederson’s despairing dive to snatch a point.