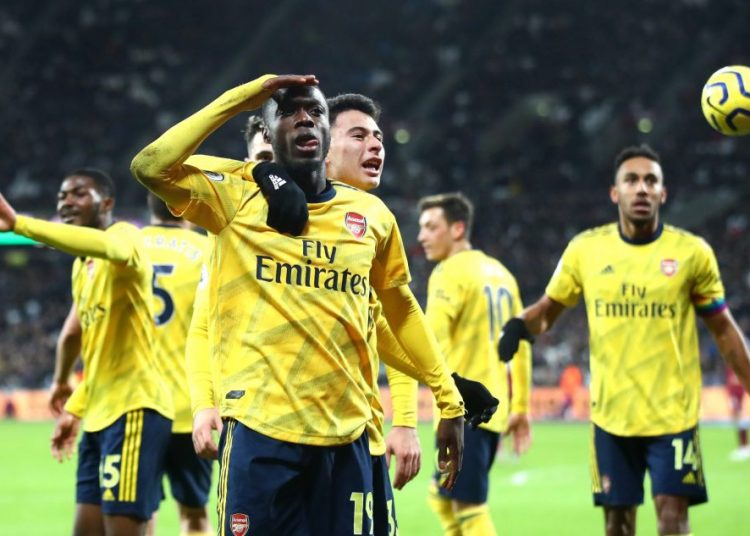 Arsenal hit three quickfire goals to seal a 3-1 comeback victory at West Ham and end a nine-match winless run in the process.

The Gunners looked on course for yet another defeat as they fell behind to a fortunate Angelo Ogbonna goal at the London Stadium – but they rallied after the break to record a fairly comfortable victory.

It was the first win under the guidance of interim head coach Freddie Ljungberg, who was rewarded for starting Gabriel Martinelli and Nicolas Pepe as both got on the scoresheet before Pierre-Emerick Aubameyang added the third.

While Arsenal supporters booed their team off at the break, it was the West Ham fans who flooded out of the stadium early as Manuel Pellegrini continues to hang onto his own job – with Ljungberg showing his credentials for landing the Arsenal role on a full-time basis.

After a draw at Norwich and a home defeat to Brighton, Ljungberg needed a response here and it finally came on the hour.

Until then this was a London derby with a distinct lack of quality or intensity, with Bernd Leno saving well from fit-again Michail Antonio the only real chance before the Hammers hit the front.

Arsenal could not clear their lines from a corner and Ogbonna shouldered the ball goalwards before it cannoned off Ainsley Maitland-Niles – called in at the last minute after Hector Bellerin was injured in the warm-up – and into the net.

There was no immediate response from Ljungberg’s men and a header well over the bar from Mesut Ozil was the best they could muster in the first 45 minutes.

Declan Rice’s thumping strike was kept out by Leno as West Ham looked to double their advantage, only for Arsenal to show they can provide the goods when it counts.

Martinelli hit his first Premier League goal on his first start in the competition as he steered in Sead Kolasinac’s cross and six minutes later they were ahead.

Aubameyang spread the ball out wide to Pepe and the club-record signing needed no second invitation to curl home a fine finish before celebrating in front of the travelling supporters.

The Ivory Coast international then provided the assist for Aubameyang, who was just onside as he hit a crisp volley past David Martin.

The win takes Arsenal up to ninth in the table and ends an alarming run of form which cost Unai Emery his job, with Ljungberg still coy on whether he wants to take the reins full-time.

Either way, he will start planning for a Europa League group game away to Standard Liege on Thursday night, while his counterpart Pellegrini will still be hoping to be in a job by then.