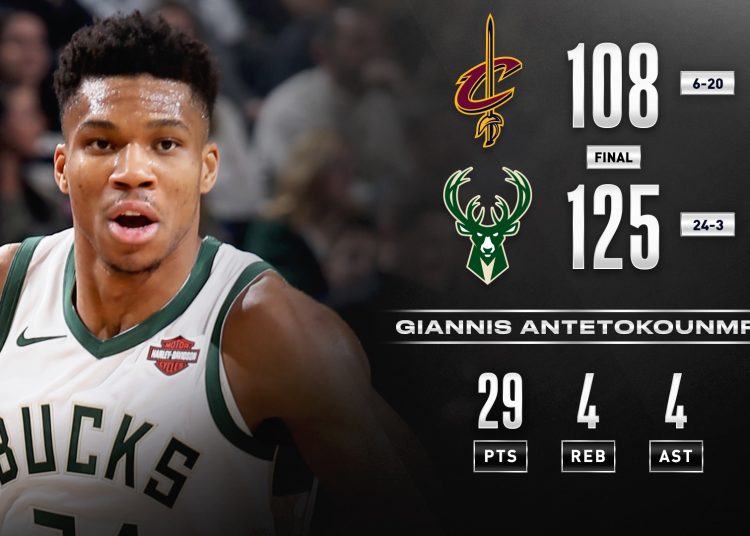 The Milwaukee Bucks continued their franchise-best start and pulled within two games of matching their all-time longest winning streak on Saturday, routing the visiting Cleveland Cavaliers 125-108.

Milwaukee faced little resistance from a struggling Cleveland bunch. The Bucks jumped to an 18-point halftime lead and expanded the gap to as many as 28 points in the third quarter on the way to their 18th straight win.

The Bucks’ 24-3 start is the best in the 52-year history of the organization. To match the 20-game winning streak of the Oscar Robertson and Kareem Abdul-Jabbar-led 1970-71 Bucks, this 2019-20 squad will have to beat two of the hottest teams in the Western Conference, the Dallas Mavericks and Los Angeles Lakers, next week.

Robin Lopez notched 16 points with a team-high six rebounds, while George Hill and Ersan Ilyasova both chipped in 11 points.

Despite playing below almost seven minutes his season-long average, Antetokounmpo recorded his 11th consecutive game with at least 24 points and a field-goal shooting percentage above 50 percent.

Sputtering Cleveland dropped its 15th game over the last 17, a skid dating back to Nov. 12. Kevin Porter Jr. led the Cavaliers scoring 15 points off the bench. Jordan Clarkson added 13 points also in a reserve role.

Cleveland got just 50 points from its starting five, led by Tristan Thompson and Kevin Love each with 12 points. Love added 10 rebounds.

Watch the highlights below: