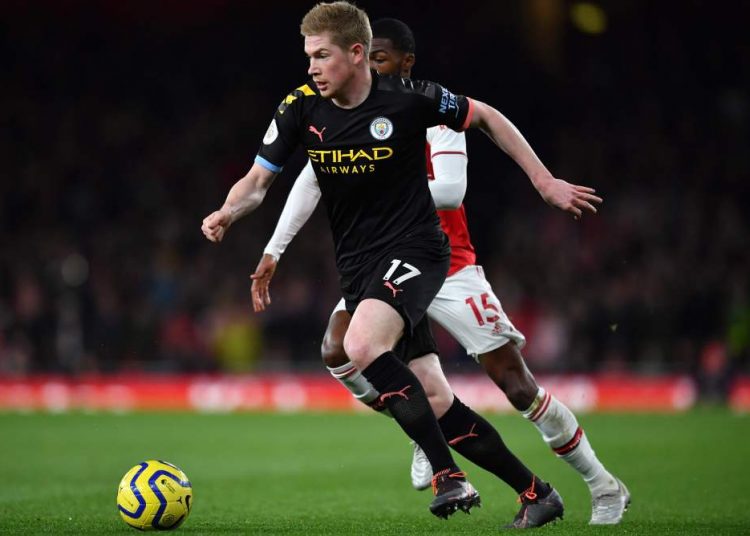 A virtuoso performance from Kevin De Bruyne saw Manchester City take an abject Arsenal to the cleaners, winning 3-0 at the Emirates Stadium.

The Belgian was at his brilliant best as he had a major involvement in every Man City goal – scoring two of them while providing the assist for the other which Raheem Sterling stuck away.

As for Arsenal, they were woeful and outshone by their opponents in every department as Freddie Ljungberg suffered his second defeat in charge of the club.

It looked like the hosts were up for it in the very early stages and the in-form Gabriel Martinelli forced Ederson into a save after just 35 seconds on the clock.

That was Arsenal’s only shot on target in the game and De Bruyne and Man City took total control of things after that.

And Pep Guardiola’s men were in front after two minutes with De Bruyne’s accomplished finish.

A firm low cross by Gabriel Jesus from the left evaded Sterling but De Bruyne was on hand to strike the ball into the roof of the net – the midfielder doing brilliantly to get his head over the quick pass.

And the visitors found themselves two goals up on 15 minutes with another cross from the left causing Arsenal problems but this time it was De Bruyne who was the provider and the ball fell to an unmarked Sterling, who tapped it into the net.

Man City have been inconsistent this season but was at their most ruthless in north London and went 3-0 up five minutes before the breakthrough that man De Bruyne.

He beat Matteo Guendouzi before sweeping the ball home with his weaker left foot from just outside the box.

De Bruyne almost had his hat-trick moments later but his powerful strike was excellently saved onto the post by Bernd Leno.

After the break, Man City took their foot off the gas as the game was already won but should have gone 4-0 up when Jesus found himself through on goal following an error at the back but Leno was equal to his shot.

Riyad Mahrez and Sterling also came close but their lack of composure did not have any impact on the result.

The game also saw Mesut Ozil kick his gloves in frustration after being substituted on 59 minutes in what was another dismal day for the Gunners.