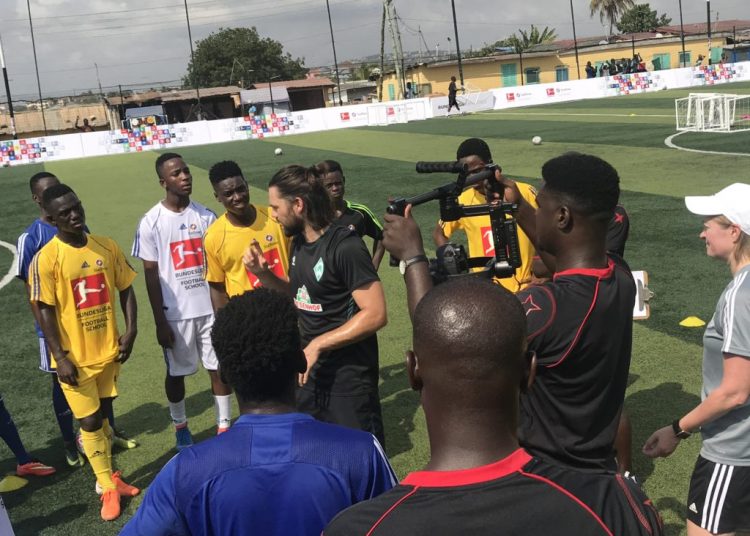 Some 100 aspiring footballers drawn from various parts of the country will for the next five days go through a mentorship and talent harnessing process being undertaken by StarTimes Ghana and the German Bundesliga.

Under the tutelage of some German football legends, coaches and Ghanaian coaches the young players will have their talents sharpened by series of compact training sessions, workshops and matches.

Day one of the StarTimes Bundesliga Football School saw the players made up of 25 under-15 players, 25 female footballers, 25 under-13 footballers and 25 under-12 footballers go through some training drills supervised by the German instructors and their local counterparts which include Samuel Boadu of Medeama SC, Isaac Amoako, Evans Adortey, Eric Ofori Antwi, Dora Zitah, Christian Chibueze and Leo Wangeh.

Speaking to the press on the opening day of the project, the head of Marketing at StarTimes Ghana, Akofa Banson said the talent hunt exercise is their way of contributing to the resurrection of the colts football.

“StarTimes has been involved in Ghana football since 2016 and we’ve seen how our local players have evolved from the local team to the national teams. We have experienced how Ghanaians have always said that our colts teams and juvenile football are dying. So we thought that since we don’t want to lose sight of the fact that the local game must also grow”.

“We are doing this as a CSR project to help project youth football in Ghana. We want the youth the youth football to grow and be where we all want it to be that is why we’re partnering the Bundesliga to bring this to the Ghanaian youth level so that we can have some great talent to shoot up to the national team level as well” she remarked.

The head coach of the Bundesliga Football School, Birger Nass described as ‘proud’ the experience of working with the players, majority of whom he is confident will develop into great footballers for the country.

“We are very proud that StarTimes and the Bundesliga could come together and realize this project for the first time in Ghana. Working together with the 100 talents, local coaches and all the staff around us is great. We will work for the next five days with the kids on the pitch twice a day, doing training sessions together with our coaches” he said.

The Ghana edition is the fourth since the inception of the project targeted at developing young footballers and coaches.

The climax of the program is on Wednesday where the players will be divided into two groups of nine teams each to put into action all they have learnt in the last four days.

It is expected that the President of the GFA, Kurt Okraku, Officials of the Sports Ministry, Bayern Munich legend Sammy Kuffour, CK Akunnor and other dignitaries will grace the event which will be preceded by a press conference on Monday where German football icon Lotthar Matthaus will address the Ghanaian media.