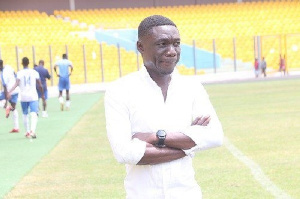 Head coach of Accra Great Olympics, Isaac Nii Armah, has boldly placed his job on the line if his team does not win their first five matches of the new Ghana Premier League season.

Olympics are back in the elite division after they were reinstated at this year’s GFA Congress. They and King Faisal were given places in the League after they appealed their relegation that took place in 2017.

The presence of Great Olympics has generated a lot of interest but it seems Isaac Nii Armah is not taking things lightly and is willing to walk away if his team does not have the full haul of points after they take on their five 5 opponents and he made this clear when he spoke to Kwesi Free Sports’ Muftawu Abdullah Nabila in an interview.

”We want to win all the five matches at the start of the season.

We have named it “Operation 15 points” but then, if after the first seven matches, Olympics do not have the points needed to stay up in the league, I will resign because I want to keep my self-respect and dignity intact.

I hope that it does not happen because I want to win the first five matches but then, in football, anything can happen.”

After the announcement of the league fixtures for the season, Nii Armah will now have an idea of how to plot to get those five victories he is talking about.

Olympics take on AshGold (away), Aduana Stars (home), Bechem United (away), Karela (home), Elmina Sharks (away) in their first five matches of the new season.