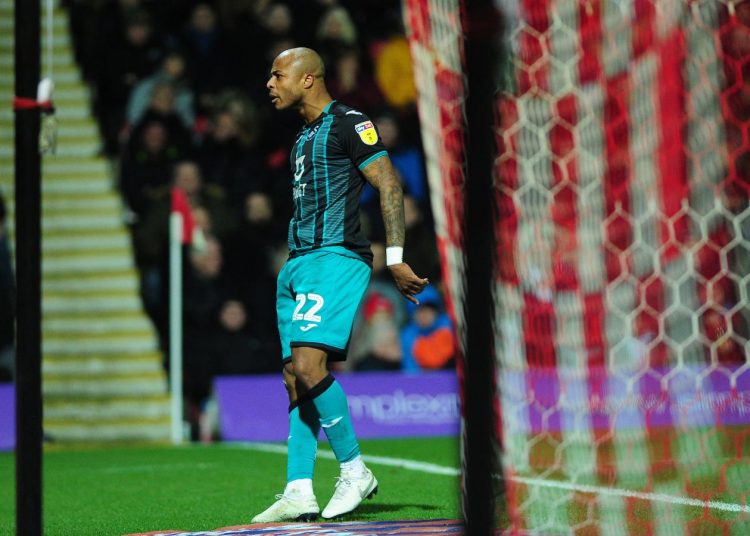 Having fallen behind to first-half goals from Bryan Mbeumo and Ollie Watkins, the Swans rallied to pull one back through Andre Ayew with his 11th goal of the season.

But as the Swans pushed hard for the equalizer, they were hit by a late sucker punch from Watkins with his second of the game two minutes from time.

Swans boss Steve Cooper made two changes to the side that won 1-0 at Luton Town last time out. It was a second-consecutive victory that pushed the Swans into seventh place.

The latter change was enforced late on as van der Hoorn pulled up in the warm-up with a knee injury so Ben Wilmot went from expecting to be sat on the bench to a starting role.

It meant Wayne Routledge was promoted to the substitutes bench.

The hosts, meanwhile, also made two changes by recalling Kamo Mokotjo to their midfield, while captain Pontus Jansson was fit again after a minor injury.

The Bees went into the game in sixth place, level on points with the Swans but with a superior goal difference.

The Swans made an encouraging start to the game against a side tipped by many for one of the play-off spots at the end of the season.

But after an even opening 10 minutes, Brentford started to threaten with the influential Said Benrahma displaying some neat touches down Swansea’s right before Watkins created the first real opening of the game when he cut in to flash a deflected shot just wide in the 19th minute.

And from the corner, Brentford took a 20th-minute lead when Mathias Jensen’s delivery found Ethan Pinnock totally unmarked at the far post. His header back into a crowded six-yard box was headed home by Mbeumo.

Swansea tried to respond immediately as Ayew’s goal-bound shot was blocked after good battling from Surridge.

But as Swansea pushed forward in search of the equalizer, they were caught on the counter-attack in the 25th minute when Benrahma drove forward before finding left-back Rico Henry overlapping.

His cross picked out Watkins who guided a difficult finish beyond Freddie Woodman for a 2-0 lead.

Brentford continued to display far more pace and purpose going forward, with Connor Roberts being overrun down the right before the visitors rallied five minutes from the break as Tom Carroll came close with a shot blocked inside a crowded area as the Swans forced two corners in quick succession.

It was a half that belonged to Brentford though, as they gave themselves a two-goal cushion to take into the second period.

Neither side made any changes for the second-half as Brentford started on the front foot by forcing three consecutive corners before a well-worked third saw Benrahma fire just wide.

Swansea tried to respond through Bersant Celina wide on the left. The Kosovan cut inside before curling a shot wide of the far post with 56 minutes gone.

Mbeumo fired just wide at the other end five minutes later before the Swans had a speculative appeal for a penalty turned down with the packed away end behind the goal claiming handball.

The Swans made a double substitution in the 63rd minute as Borja and Aldo Kalulu replaced Surridge and Carroll respectively.

And the move paid off within two minutes as David Raya failed to hold Celina’s fierce shot and Ayew forced his way to the rebound first to apply the finishing touch under pressure.

Swansea had the home side rattled for the first time as Jake Bidwell and the lively Kalulu threatened before Wilmot and Matt Grimes picked up yellow cards.

There was far more attacking intent from Swansea now as they went in search of the equalizer with Barrie McKay replacing George Byers with five minutes remaining.

But as Swansea pushed forward they were hit on the counter for the second time in the game as Watkins raced clear two minutes from time to slip the ball beyond Woodman.