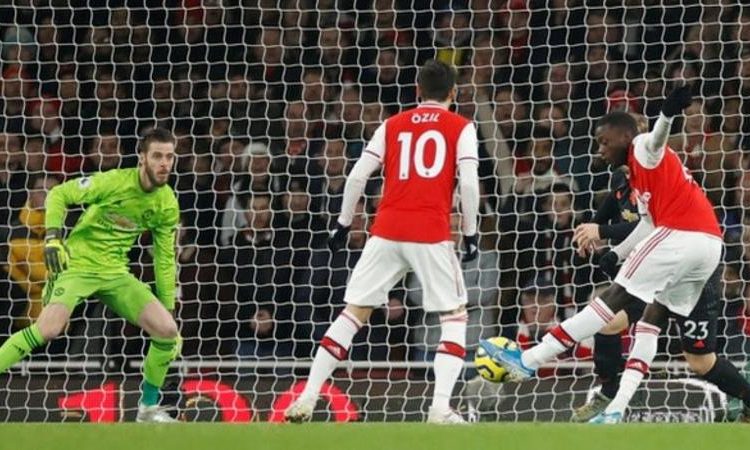 Nicolas Pepe scored his fifth goal of the season and also hit the post before he was substituted (Image credit: Reuters)

Mikel Arteta earned his first win as Arsenal boss as the Gunners produced a powerful first-half performance to beat a lacklustre Manchester United.

The visitors, who were without the injured Paul Pogba, actually began brightly, but the game took a different turn on eight minutes when Nicolas Pepe steered in his fifth goal of the season after Sead Kolasinac’s cross was deflected to him.

That led to a first half in which the hosts were in control and Pepe hit the post before they doubled their lead when his corner was smashed in from close range by Sokratis Papastathopoulos.

Ole Gunnar Solskajer’s side came into the game with one loss in their previous nine games, and although they improved after the break, they rarely tested Arsenal goalkeeper Bernd Leno.

It was characteristic of a stop-start season in which they are yet to win three Premier League games in a row.

The defeat leaves them fifth in the table, five points behind Chelsea, who drew with Brighton earlier in the day.

Victory for Arsenal ended a run of seven home games without a win in all competitions and lifted them to 10th place, four points behind United.

But they remain closer to the relegation zone than the top four.

Arsenal host Leeds on Monday, 6 January in the FA Cup third round (kick-off 19:56 GMT), while Manchester United travel to Wolves on Saturday, 4 January (kick-off 17:31) in a repeat of their quarter-final defeat last season.