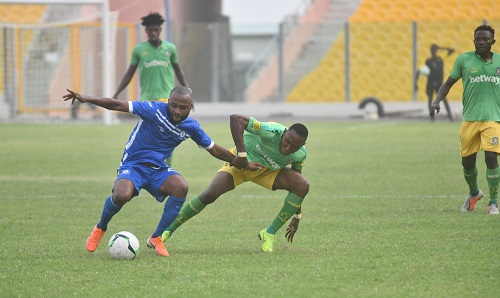 Awako (in blue) in battle for Great Olympics

Great Olympics midfielder, Gladson Awako, has slammed critics who claim he is past his prime and he says that he still has a lot to offer to Ghana football.

The 29-year old player signed for Great Olympics in November 2019 ahead of the new season and has been a part of the team in their campaign so far.

He scored his first for the season in Olympics’ 2-0 win over Karela in Week 4 but he has had to fight off the tag of being too old and being past his best.

After the match against Elmina Sharks at the Ndoum Stadium, the former Heart of Lions and TP Mazembe midfielder said that he was still a very active player and if his peers were still playing the beautiful game, he had every right to still be on the pitch.

“I am not past it neither am I told to play the game. I started playing in Ghana years ago and so, people feel I am far too old for this.

People need to stop saying I am old or I am a veteran. They need to give me a chance for me to prove myself.”