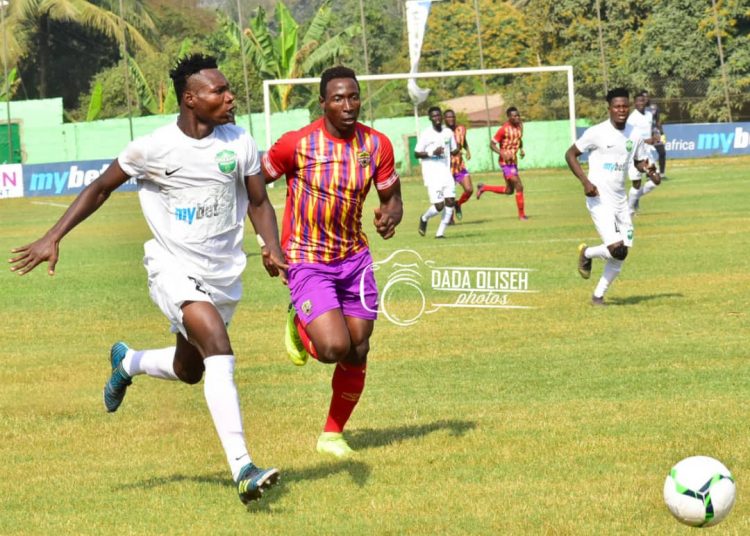 Accra Hearts of Oak returned to winning ways in the Ghana Premier League with a narrow 1-0 win over Dreams FC in Dawu.

Striker Kofi Kordzi scored the only goal of the game in the second half to condemn Dreams to their first defeat at home this season.

Hearts of Oak threatened first when Joseph Esso curled a delightful free-kick that came off the top of the crossbar in the 14th minute.

With Dreams struggling to muster any decent sequence of play, Hearts of Oak looked the more dangerous team every time they attacked.

But it took another 10 minutes for the Phobians to sniff at Peter Sarkodie’s goal again, this time Daniel Afriyie’s glancing header from Raddy Ovouka’s pinpoint cross just going wide off the mark.

Dreams had their first on target on the half hour mark with danger man Emmanuel Ocran shooting straight at Richard Attah from 20 yards.

On the stroke of half time, Joseph Esso hit the underside of the crossbar, this time from a vile shot unleashed from inside the box after brilliant work on the wings to create space for himself in the area.

The Phobians went into the break unlucky not to be ahead.

Back from recess, Hearts of Oak continued from where they left off.

They finally got their reward in the 54th minute when Kofi Kordzi twisted and turned in the box before firing a low drive into the bottom corner.

The goal came at the end of some sweet intricate passing from Edward Odoom’s men.

It was a deserved lead for the Phobians.

Dreams almost levelled after the restart but Ibrahim Issah’s effort came off the woodwork before being cleared eventually.

The rest of the second half wore on without clear-cut chances with Esso and Afriyie shooting wide towards the end.

Goalkeeper Atta was booked for time wasting late on but the Phobians had victory wrapped then, making amends for their home defeat to Kotoko 7 days prior.

Hearts will next face Ashantigold in Accra in a mid-week fixture.