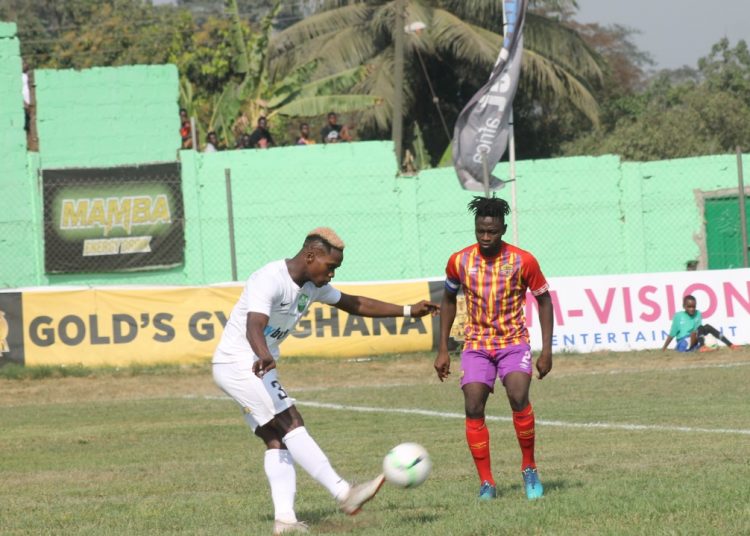 Accra Hearts of Oak recovered from their Super 2 loss to Asante Kotoko and beat Dreams FC 1-0 at the Theatre of Dreams in Dawu. Kofi Kordzi got the goal in the second half after he received the ball just inside the penalty area and shot on the turn to win the match for the visitor.

In Kumasi, Kotoko’s blushes were saved by a late equaliser from William Opoku Mensah as they drew 1-1 with Liberty Professionals. Taminu Muntari had given Liberty the lead in the 56th minute but they failed to increase the tally despite creating several chances.

In Accra, Olympics fell to 1-0 to defeat at the hands of WAFA. Eric Asamany’s first goal turned out to be the winner for the visitors who last in the last round to Liberty.

After losing their two previous matches, AshGold found the winning side again when they defeated Dwarfs 1-0 thanks to a second half goal from Ibrahim Samed.

Yahaya Mohammed got his 7th goal of the season as Aduana Stars beat Medeama 1-0 in Dormaa. Mohammed struck in the 73rd minute for the home side to give them all three points on the day.

Bechem United enjoyed home comfort as they beat Berekum Chelsea 2-1. Charles Mensah put the home side ahead after 4 minutes but his team mate, Kofi Agbesimah, scored an own goal in the 21st minute to bring Chelsea back into the match. However, Adu Kwabena Prince got the winning goal for Bechem United in first half injury time.

Elmina Sharks got themselves a 1-1 draw at home to Eleven Wonders on Saturday. Sule Musa gave Wonders the lead in the 57th minute but Emmanuel Addington leveled for Sharks in the 68th minute.

The biggest victory went to Karela United who beat Legon Cities FC 3-0 in Tarkwa thanks to a Diawisie Taylor brace and one from Samuel Ofori.

The most entertaining match was played at the Accra Sports Stadium on Friday between Inter Allies and King Faisal.

Inter Allies took a 2-0 lead in the first half thanks to Victorien Adebayor and Samuel Armah but Ibrahim Osman and Mustapha Mohammed levelled for Faisal but Allies fought back to score two more from Armah and Michael Gyamerah to win the match 4-2.