“I am more interested in Strasbourg’s victories, not my goals”- Majeed Waris 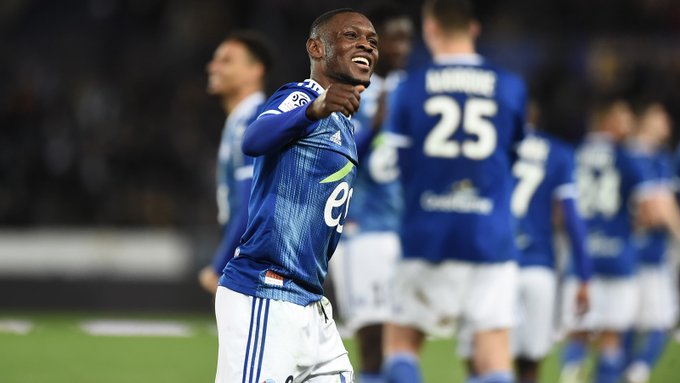 Ghana forward, Abdul Majeed Waris, says the success of Strasbourg in this season’s French Ligue 1 campaign means more to him than getting loads of goals on an individual basis.

The former Right To Dream player got his second goal for Strasbourg on Sunday in their 3-0 home win against Reims. He scored the second of the three goals in the 82nd minute from a Ludovic Ajorque assist.

The strike was his first at home for them since he joined on loan from FC Porto in January.

Speaking to journalists after the match, Waris was pleased with his output but he stressed that he was more eager to see the team do well in the league.

I am happy that I got my first goal at home. The atmosphere was good and I want to score a lot of goals for this club but I do not want to only score. I want to win matches here too.

We have a good team here and we can climb even higher on the table. I believe we will work harder and win a lot more games.

For me, it is not only about the goals. I care more about the team’s victories but then, scoring is important. Before I came here, there were a number of teams who looked at me but refused to sign me because they felt that I had not played football for 6 months.

But I work hard all the time. Not playing was never an excuse for me not to train and now that I am here, everyone can see that, it is the same Waris they have always known.”

Waris got his first Ligue 1 goal for Strasbourg on February 5 in their 1-0 win at Toulouse and after making it two, fans of the club will expect to see more goals from the Ghanaian player.

Strasbourg’s next match in the French League is at Lyon on February before they take on Amiens, Montpellier, and PSG.