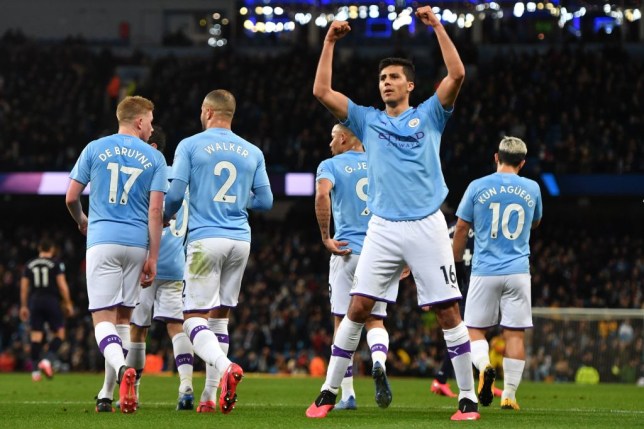 Kevin de Bruyne made one goal and scored another as Manchester City easily saw off West Ham in their first game since being banned from European competition for two years by Uefa.

Friday’s punishment – which City say they will appeal against at the Court of Arbitration for Sport – has cast a shadow over the club’s future but brought a defiant reaction from their fans inside the ground.

There were frequent anti-Uefa chants in the first half, with the loudest coming just after Rodri had met Kevin de Bruyne’s corner at the near post to break the deadlock with a flicked header that Aymeric Laporte may have helped over the line.

City’s supporters had brought banners too, with some reading ‘Uefa cartel’ and ‘Uefa mafia’, and there were also plenty of songs in support of manager Pep Guardiola and the club’s owner Sheikh Mansour.

On the pitch, the City players certainly did not seem to be lacking any focus and only some poor finishing, notably by Gabriel Jesus, stopped this from being a much more comfortable Premier League victory.

West Ham offered little in response, managing only six touches in the opposition area, and failing to register a single shot at goal until Michail Antonio blasted over with 15 minutes left.

The Hammers remain in the relegation zone, a point adrift of safety after a run of six league games without a win and with a trip to Anfield looming on Monday as their next test.

At the other end of the table, Guardiola’s side are now four points clear of third-placed Leicester but even this win leaves them a distant second to leaders Liverpool, who are 22 points clear with 12 games remaining,

Off the pitch, City are clearly up for the fight but they will have to be the same on it, with three competitions still up for grabs even though the defence of their Premier League title is all but over.

Take a look at the highlights below

The best bits from our victory over the Hammers…

"You must believe in things beyond football"- Aduana Stars coach W.O. Tandoh