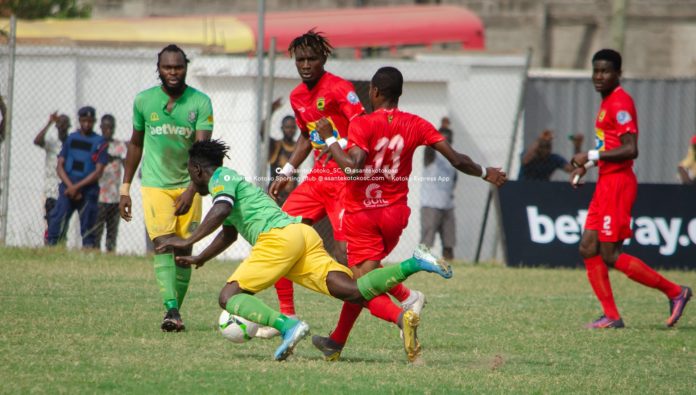 Follow Asante Kotoko and Aduana Stars’ infamous Ghana Premier League game played in midweek, Skyy FM sports journalist, Victor Atsu Tamakloe, argues that the two clubs should be punished for their antics even if they didn’t technically break a law.

Asante Kotoko is synonymous to winning. With 24 league titles, 10 F.A Cups and 1 CAF Champions Cup (now CAF Champions League) it has a good claim as the most successful football club in Ghana.

Beyond the titles, Kotoko boasts of some of the greatest to have played in this country across different generations. From Wilberforce Mfum to Sarfo Gyamfi, ‘golden boy’ Abdul Razak to Opoku Nti, Kwasi Appiah to Joe Okyere, Kotoko have seen them all.

Add its ties to Manhyia and their huge fan base and you have a proper football royalty. As it is with royalty, standards are always high. This is no different with Kotoko. Winning is not only expected but has been woven into the very fabric of the club.

Be it transfers or matches, they expect to win and in style. Last Sunday, following Victorien Adebayor’s other-worldly performance in Inter Allies 3-1 win over Berekum Chelsea, scores of Asante Kotoko fans swarmed the Nigerien and chanted the words ‘Adebayor, Kumasi, Adebayor Kumasi’. The message was clear; they wanted Adebayor to play for the club in the future. In their minds, Kotoko deserves the best and –in Adebayor’s case, the best need to play for Kotoko after auditioning elsewhere. It is their birth right. You can question the sense of entitlement but this is what the club and its fans are used to; winning.

However, the path to winning has not always been glorious and on Wednesday, we got a reminder of the lengths to which the club would go just to win. Per the Ghana Football Association’s regulations, clubs are supposed to attend pre match technical meetings at 10:00 GMT on match days and then report for the match itself at least 90minutes before the stipulated time for kick-off.

For the pre match technical meeting which took place at 9:00am this time, Kotoko were represented by Issa Adamu and Nana Kwame at the Nana Agyemang Badu Park. However, for whatever reason, the Asante Kotoko team itself arrived at the venue 40minutes before the time stipulated for kick off. Word is that instead of going to Dormaa through Berekum, Kotoko went through Drobo and what should have been a distance of 50 kilometres became a distance of 130 kilometres.

This is where it all began. Word is that the decision to use the alternate route was made on the advice of a spiritualist. Of course it did not matter that the players could be jetlagged or fatigued by the time they got to the venue. It is worth noting that Kotoko have never won at the venue and have only picked a point on two occasions out of 10 previous visits. So you can understand the desperation to do whatever it takes to win even if it means running the risk of leaving your players incapable of running the full length of the game while at it. If you think this was crazy, wait for what comes next.

While warming up, Kotoko’s Naby Keita squats right behind one of the goalposts in the full glare of the teaming fans, the 29,000 who were watching on the StarTimes App, the thousands watching on TV in Sub-Saharan Africa, removes his penis and urinates on the pitch. If I did not know better, I would assume he did that because the venue had no washrooms. Far from that. The Nana Agyemang Badu Park has four separate wash rooms; one in each dressing room, one in the Match Commissioner’s office and a fourth for the fans.
When the game commenced, right back Christopher Nettey attempted to throw something into Aduana’s post but was stopped and subsequently booked.

Trumping all of that, was the decision to start the game with 10 players instead of 11. While in the tunnel, Aduana Stars realised that Asante Kotoko were sending only 10 players unto the pitch, having presented a team sheet of 11 players to the referee. The referee was informed and Kotoko were forced to send on substitute Collins Ameyaw for Martin Antwi, who they had withdrawn. However, that would not be allowed to stand because Ameyaw had been enlisted as a substitute. Knowing fully well what they wanted to do, Kotoko started the game with 10 men, after the pre-match formalities. Aduana Stars then pulled off one of their players too.

You see, there is nothing wrong – for those who do it – with practicing one’s belief in superstition or dabbling in the dark. As Africans, it is our way of life. Be we Christians, Muslims or Traditionalists, we believe in a superior being to whom we go to for favour or luck. These deities or Supreme Being are our citadel of hope and refuge. So to suggest we cease faith in them would be the death of us.

But we need to draw the line between the sane practice of our faith and uncivilized acts while on an obsessive search for luck or favor from them. We can practice faith, but not in a manner that is essentially counterproductive. Counter-productive because while these things may deliver 3points, the long term damage to the image of the clubs, far outstrip today’s gains.

Therefore given the efforts at restoring some decency to the brand that is the Ghana Premier League, we cannot encourage acts that denigrate our game all in the name of expression or practice of faith. Naby Keita’s crazy antics need to be punished to send a message of where the Football Association stands on such issues. 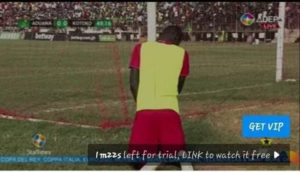 Many have sought to justify both club’s decision to start the game with ten men. They say the rules permit clubs to start games with a minimum of seven. They say it does not violate the law. What they do not tell you is that they are talking about the letter of the law, not the spirit of the law. What about the spirit of the law? The reasoning behind the law. Its original purpose. Best use of the law would be for cases of injuries and/or suspensions. Not for purposes that will only bring the name of the game into disrepute.

Again, if we are to allow clubs who refuse to field eleven players even when they have fit and eligible substitutes on the bench, where then do we draw the line between silly exploitations of the law and actual use of the law for good reasons. There is indeed a case to be made. Yet, Kotoko and Aduana are likely to escape punishment and they will not be the first to.

In 2011, Hearts and Kotoko got away with it when Mahatma Otto and Kofi Nti Boakye respectively were made to sit on the bench for whatever reason despite being named as starters. There are other examples too. Sadly, this won’t go away for the simple reason that the very clubs that constitute the GFA and have the power to amend the regulations at Congress are the same one’s engaging in the act. Unless one of the GFA’s adjudicatory bodies take up this matter and prosecute the teams involved.

These incidents help no one. Not Kotoko; the giants looking to end a five year league drought or the GFA and the Ghana Premier League; a brand looking to regain public trust and goodwill.