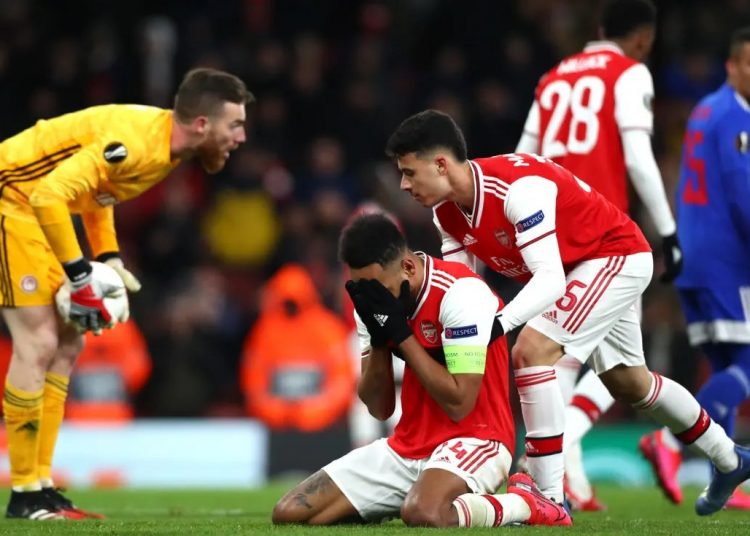 Pierre-Emerick Aubameyang has scored 20 goals this season for Arsenal including a magnificent effort on Thursday night.

However, it’s one goal that he probably should have scored and didn’t, that will haunt him for the rest of this season at least.

With Arsenal behind in extra-time during their Europa League tie against Olympiakos, Aubameyang had a golden opportunity take Arsenal through.

After the away side failed to deal with a ball into their box in the 103rd minute of the match, it rebounded to Aubameyang who was alone and seven yards out.

The Gabonese striker took his effort first time, but with everyone expecting the net to bulge, it flashed past the post and out for a goalkick.

Aubameyang fell to his knees and put his hand on his head, a reaction which was mirrored by his teammates, coaching staff and fans at the Emirates who could not believe that he had not scored.

Arsenal were effectively knocked out of the competition.

Take a look at the shocking miss below:

How on earth did Aubameyang miss???? 🙈🙈 #EuropaLeague pic.twitter.com/wdUx2aW82m

It was a painful loss for the Gunners who had won the first leg 1-0 in Greece but had been taken to extra-time at the own stadium after Pape Abou Cisse scored for Olympiakos.

Aubameyang’s stunning bicycle kick in the 113th minute appeared to have given Arsenal the win but Olympiakos broke Gunners’ hearts with a 119-minute leveller on aggregate from Youssef El Arabi, which put them ahead on away goals.

See the great goal by Aubameyang below

After the game, a teary Aubameyang struggled to explain the miss to BT Sport.

“I don’t even know. It can happen but I do not know how I missed this chance. I was tired, I had some cramps but it is not an excuse.

A crestfallen Pierre-Emerick Aubameyang struggles to find the words to explain his last-minute miss which saw Arsenal fall out of the Europa League.

The response to the miss was mixed, with some Arsenal fans willing to forgive the player who has bailed them out so many times this season.

Fans of opposing clubs, however, aren’t being so charitable.

Head up, without you we’d be in the championship

This gabonese vardy is a joke man

Watching Aubameyang miss again for the hundredth time. That’s pressure that. When it matters he’s bottled it. Ighalo finishes that

I actually feel so bad for him, carried us the entire season misses ONE opportunity and some people are turning on him. We don’t deserve him. https://t.co/VjX8uQogI0

Look at Auba. He’s broken. He doesn’t deserve this. Thanks for everything you beautiful human being and all the best at the new club https://t.co/rALGRb8OqJ

Football can be cruel. Aubameyang will be fully aware of the implications of his late miss.

Time and time again, he has picked us up when we were down. Now it’s time for us to repay the favour. He needs our support now more than ever.

We’re all still behind you, captain. pic.twitter.com/j65sROoide