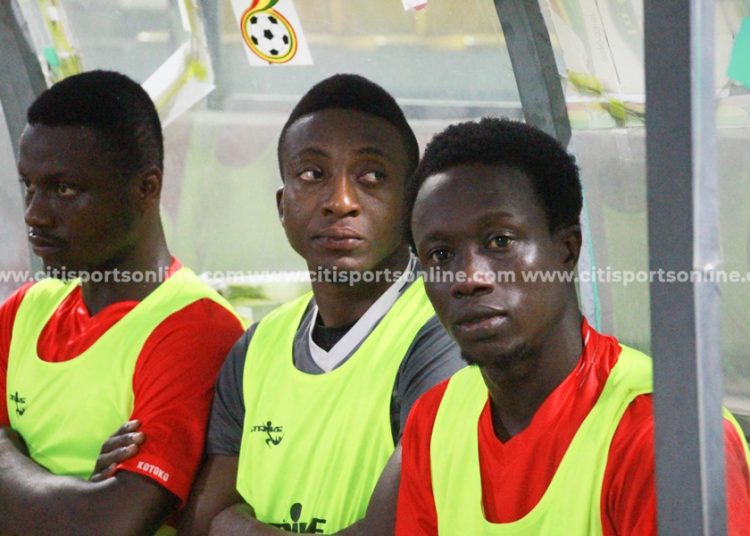 Felix Annan on the bench for Asante Kotoko

Annan was in the Stars’ last squad for their AFCON 2021 Qualifiers against South Africa and Sao Tome and Principe, but did not play in either of the matches.

However, he was left out completely as CK Akonnor drafted in Hearts of Oak shot-stopper, Richard Attah instead.

The Kotoko goalkeeper has endured a tough season with the Porcupine Warriors having not featured in Kotoko’s last eight matches in the Ghana Premier League but he returned to the side for their FA Cup loss to Asokwa Deportivo.

Annan had actually started the season as Kotoko’s first-choice keeper and captain, proving to be one of the safest pairs of hands in the country.

His good form in recent years had seen him earn Black Stars call-ups with many predicting that he could soon take up a starting role in the national team.

However, those hopes appear to have been dashed, at least temporarily, by his lack of game-time at Kotoko.

Annan has not played since he missed the club’s match against Ebusua Dwarfs, on January 19, after he got married that weekend, and has lost his place in the first team to Kwame Baah.

After C.K Akonnor announced his 23-man squad, Annan tweeted ‘Thank You’, which many have interpreted to be sarcastic.

He added two clapping emojis as well as a red dot, which, some believe, is a shot a Kotoko.

The tweet has elicited mixed reactions from Kotoko’s fans.

While some have tweeted in support of Annan and expressed their disappointment in his treatment at Kotoko, others criticised the keeper for his reaction, which they say is unnecessary.

Unnecessary tweet if you ask me. We all share your pains and hoping things will change but at this hour, anything you tweet or say will be misinterpreted for agenda.
Keep your head up and continue working harder. ”Akyea nanso embuu yɛ sen abebuo nyinaa”@Jo_han_nes i told you😓

I know your time will come champ

I will berate you for marrying in the middle of the season as a professional player but I believe you gonna come out strong, none of our keepers locally and abroad is better than you…keep believing because you are our number and is gonna come soon @van_felix12

Felix know that we are behind you. As I type this, I’m in tears. I’m really pained. You built this for years only for this to happen to you. Please be strong in the Lord. Nobody really understands what’s happening to you. It difficult to take. I’m sorry but be strong♥️♥️♥️♥️