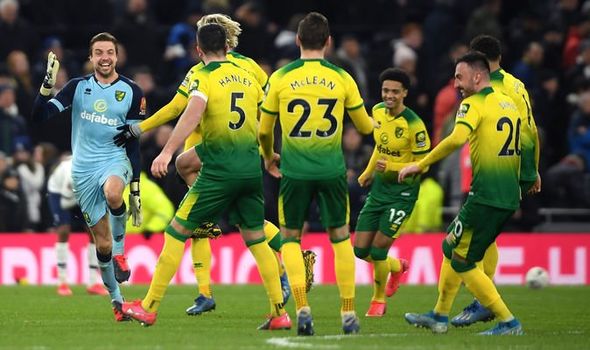 Tim Krul was the hero by saving two penalties as Norwich beat Tottenham in a shootout after a 1-1 draw to reach the FA Cup quarter-finals for the first time in 28 years.

Norwich were on the back foot in the penalty shootout when Kenny McLean’s first kick was saved by Michel Vorm, but Erik Lamela hit the crossbar for Spurs with Troy Parrott and Gedson Fernandes seeing their efforts pushed away by Krul.

The Dutch goalkeeper, who took his time to set himself before each kick, sprinted to the opposite end of the ground to celebrate with the 9,000 joyous travelling supporters in the away end.

At the same time Spurs defender Eric Dier was involved in a confrontation in the stands after being “insulted” by a fan.

Tottenham had actually taken the lead early on through Jan Vertonghen, as the Belgium defender rose highest to powerfully head in from Giovani lo Celso’s superb cross.

But they were forced back by Norwich as the visitors caused plenty of problems – Emiliano Buendia and Lukas Rupp both forcing stand-in goalkeeper Vorm into making sharp saves.

Having looked like being left frustrated, the Canaries got a deserved equaliser on 78 minutes as Josip Drmic bundled in from close range after Vorm spilled Kenny McLean’s drive.

At the other end, the hosts could have won it with five minutes of normal time remaining but Serge Aurier saw his low shot cleared off the line by the retreating Ben Godfrey. With no further goals in extra time, Norwich made it a night to remember.

Daniel Farke’s side will host the winner of Thursday’s tie between Derby and Manchester United in the quarter-finals.