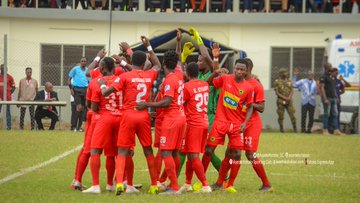 It was a case of the ex for Karela as William Opoku Mensah scored against his former side to give Kotoko a 1-0 at the Akoon Park in Week 13 of the Ghana Premier League on Friday.

Kotoko were hoping to get points to go top of the table ahead of Aduana Stars, Berekum Chelsea and Medeama who would all play later in the game week.

Their wish took a realistic turn after just two minutes when Opoku Agyemang received the ball in the box and tucked the ball home.

Ultimately, the goal settled the match in Kotoko’s favour and they went to the top of the league table.

The match also saw the return of Burkinabe forward, Sogne Yacouba, to the team.

He had not featured for the Reds since match day 5 due to a contractual stand-off. It unclear what his re-inclusion means in terms of whether or not he stays with the club.