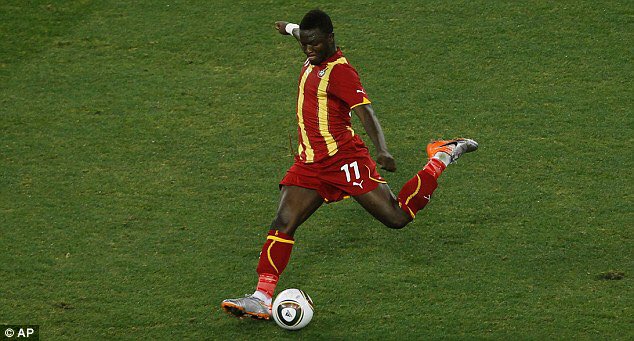 The scene was Ghana’s quarterfinal game against South American powerhouse, Uruguay in the FIFA World Cup hosted by South Africa, the only to be held on the continent.

And Ghana’s Sulley Ali Muntari pulled an exceptional goal out of nothing.

The Black Stars of Ghana were carrying the hopes and pride of the African continent dazzling fans and playing as Spartans in the arena of gods, daring to face the biggest footballing nations in the world.

Ghana had outperformed themselves and was riding on the hope of making history that will be on the lips of fans on the continent for ages.

The left-footed Muntari picked up a pass from Asamoah Gyan, ran towards the right flanks, cut back with his left and smashed from 35-yards a ludicrous shot to beat Fernando Muslera in goal for Uruguay just before the first half whistle was blown.

It was a simply ridiculous effort from way out  and it was what Ghana and the rest of Africa hoped would be the building block of a story that would end up being a FIFA World Cup upset.

The Black Stars, however, went ahead to lose the game 4-2 on penalty shootouts after Diego Forlan grabbed the equalizer in the 55th minute for Uruguay.

The place in the semi-finals of the World Cup still remains a dream for Africa but the continent has not forgotten Muntari’s goal against Uruguay.

Seems y’all have forgotten. This was pure class and typified Muntari. pic.twitter.com/rsO7GgcEI1

“Be consistent and get your national team places”- C.K. Akonnor to home-grown players