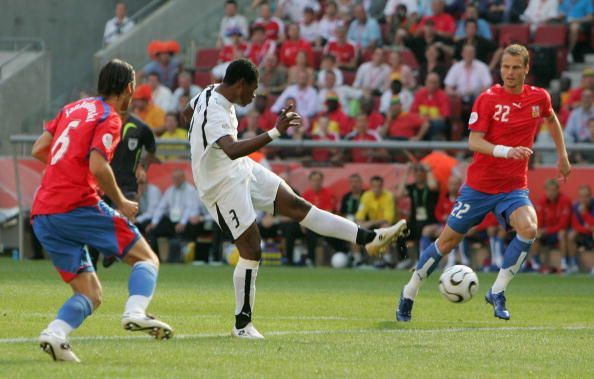 At the Rhein Energie Stadion in Köln, Germany, the Black Stars shocked the Czech Republic and the world as Asamoah Gyan gave Ghana a very early lead.

On the back of a 2-0 defeat to European giants, Italy, the West African giants had an even more difficult test as they faced the Czech Republic who were ranked 2nd in the world at the time.

The Stars were the underdogs and were given little chance of defeating a dominant Czech Republic team.

However, it was not meant to be for the Europeans as the underdogs defied all odds and landed the first blow of the game.

Captain of the side, Stephen Appiah located Asamoah Gyan lurking around the 18-yard-box of their opponents and picked the striker with a well-laid pass.

“Baby Jet” chested the ball and calmly placed it in the far left corner to beat Chelsea’s Petr Čech.

Africans was in delirium, Ghanaian fans, in ecstasy and the world, shocked.

The Black Stars of Ghana went on to win the game 2-0 and subsequently qualified from Group E with 6 points after beating the United States of America in their next game.

The craziest day in Ghana football in Koln. I like to call it the summer we stunned the world.

Gyan, Muntari with the goals but it doesn’t say enough about the collective quality on display that day. Appiah and Essien in midfield. Monstrous display. pic.twitter.com/FdrOyPkSx4