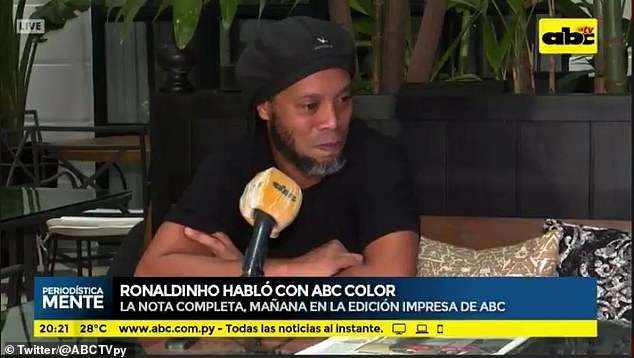 Ronaldinho has opened up about his Paraguayan ordeal for the first time after being arrested for entering the country with a fake passport.

Former Brazil and Barcelona star have been placed under house arrest after being picked up alongside his brother by authorities for using the forged documents.

Still, under investigation, he is under house arrest at the Palmaroga hotel in the capital of Asuncion, having originally spent 32 days in prison.

And speaking to national television channel ABC Color, the 40-year-old revealed his shock at the situation he finds himself in.

‘We were amazed to learn that the documents were not legal,’ he said. ‘Since then, our intention has been to collaborate with the justice system to clarify the facts.

‘From that moment until today, we have explained everything and facilitated everything that has been requested of us.

‘It was a tough blow, and I never imagined that I would go through such a situation. All my life, I have sought to reach the highest professional level and bring joy to people with my football.’

Ronaldinho’s lawyers’ are maintaining their client’s innocence, insisting he received the passport as a gift from a local sponsor.

And the 40-year-old already knows what he plans to do when he is eventually allowed to leave the country and return to Brazil.

‘The first thing will be to give a big kiss to my mother, who has lived through these difficult days since the start of the Covid-19 pandemic in her home,’ he said.

‘Then it will be to absorb the impact that this situation has generated and move forward with faith and strength.’

Ligue 1 & 2: France's top two divisions will not resume this season