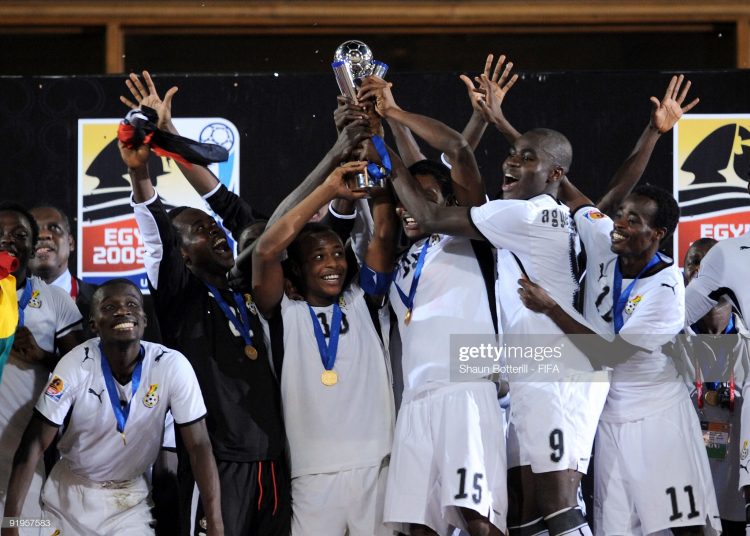 CAIRO, EGYPT - OCTOBER 16: Ghana captain Andre Ayew holds up the trophy with team-mates during the FIFA U20 World Final match between Ghana and Brazil at the Cairo International Stadium on October 16, 2009 in Cairo, Egypt. (Photo by Shaun Botterill - FIFA/FIFA via Getty Images)

Former Ghana U-20 midfielder, Gladson Awako, has revealed that Nigerian pastor, TB Joshua, contributed to Ghana’s 2009 FIFA U-20 world cup triumph in Egypt by offering the team prayers before each game and arranging the order of Ghana’s penalty takers in the final against Brazil.

Ghana became the first African team to win the FIFA U-20 world cup when they beat Brazil 4-3 on penalties after the game ended 0-0 after extra time.

Ghana had a man sent off in the 37th minute when Daniel Addo was given his matching orders.

Eleven years since that victory, member of the team, Awako, 31, has revealed TB Joshua predicted would have a man sent off.

“During the U-20 World Cup in Egypt 2009, we normally gathered around the centre to pray. The coach usually made us speak to a man on phone. He will put the phone on loud speaker so we could all hear and then pray and do what he says,” Awako revealed in an instagram live chat with YAC Media.

“Most of the things he said came to pass especially the final. He predicted that we will get an early red card and also told us how we will arrange the penalty takers.

“All that came to pass. Honestly I didn’t know who it was until we won the cup and they told us the man was TB Joshua.”

Awako currently plays for Ghana Premier League side Great Olympics where he is captain.