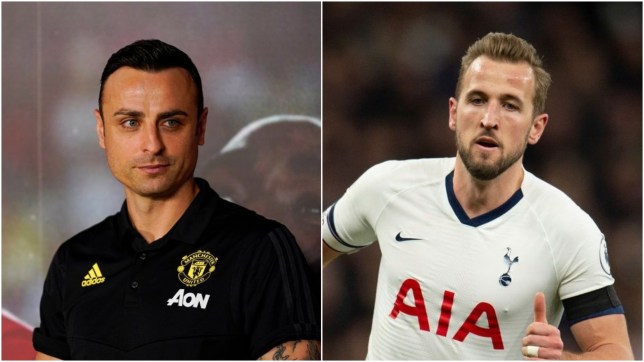 Dimitar Berbatov believes Harry Kane’s head is ‘not in the right place’ and says he may need to make the ‘tough decision’ to leave Tottenham for Manchester United.

Former striker Berbatov won two Premier League titles at Old Trafford after leaving Spurs to join United in 2008 and says Kane may have to follow suit.

Kane has been one of the most prolific goalscorers in Europe over the past six seasons, scoring 181 goals in 278 appearances for Tottenham.

But the England captain is yet to win any silverware in north London and admitted in March he may be forced to leave if Spurs fail to improve because he wants to win trophies ‘sooner rather than later’.

Berbatov says Kane is in the ‘exact same situation’ as he was over a decade ago and may need to leave Tottenham.

‘The final step for me was joining Manchester United and I knew I would be making people disappointed – especially Tottenham fans – but I was following my own path,’ Berbatov told the BBC ‘s Football Daily podcast.

‘I knew if I missed that chance another one might not come. This is how it is in football. Sometimes you need to make tough decisions.

‘The same situation is happening with Harry Kane at the moment, the exact same.

‘It was the same with [Christian] Eriksen. He wasn’t really there in the last couple of games. I watched the games and I saw that his head was not there.’

‘Kane is in the same situation. If there is any truth in the rumours, it’s in his head, 100 per cent. ‘The lack of trophies is the main problem for players like Kane.

He’s not getting any younger. He wants to look back and know he won trophies. ‘When I see Spurs play United now, even if on paper Spurs have better players, they still go there with fear.’