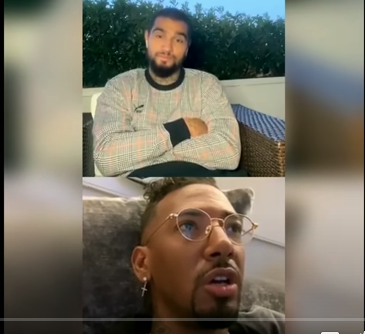 At the 2010 FIFA World Cup, brothers Jerome Boateng and Kevin-Prince Boateng became the first brothers to play against each other for different countries in world cup history.

Born in Germany to the same Ghanaian father, the brothers chose to represent different countries in their international career with the older Boateng, Kevin-Prince, 33, choosing to play for the country of his father and Jerome, 31, chose Germany.

The build up to the group clash was intense with media coverage mostly centered on the two brothers’ acrimonious relationship at the time.

Germany won the game 1-0 through a Mesut Ozil goal.

Ten years have passed and the brothers have since settled their differences.

In an instagram live chat, both brothers looked back at the historic moment.

Kevin: “When we played against each other in 2010, we made history. It had never happened that two brothers played against each other in world cup history. It was unbelievable. I still remember the night before, you know, in every family, brothers talk and argue, and we didn’t take for a long time over some stupid stuff or whatever. I still remember the feeling the day before, how was it for you, playing against your second country Ghana, against your brother with all the media on us, it was like the game was not so important? I know I didn’t sleep…

Jerome: “Yeah, yeah like you said, I think it was a lot of pressure on both of us and our family even because I think it was really bad with the media attention and the German media put pressure on me because of the misunderstanding between us at the time. We got into a fight or something like that and everybody was on his own. But like you said, the game itself, I was super nervous. Our parents were watching and were super proud and it was a super important game for both of us. I was so nervous I think I slept, 2 or 3 hours and I was just praying that we win the game and that I play a normal game and don’t make a mistake [both chuckle]. I think it was one of the most high pressure games I’ve ever played in at the world cup.

Kevin: “I think the same. You played world cup and champions league finals but to play this game was like crazy pressure for everyone.

Prince Boateng has not played for Ghana since being sent away from the 2014 FIFA World Cup following a clash with head coach Kwesi Appiah and he admitted to his brother his regrets about the bitter end to his national team career.

Kevin: “With the national team, I didn’t like the way it ended because they gave me so much. But you never know, maybe I can go back and play one more time again.”

Jerome: “Or maybe the assistant coach.”

Kevin: “Or maybe the coach, you never know.”

Kevin: “My relationship with Ghana is still intact. I still feel close to them.”