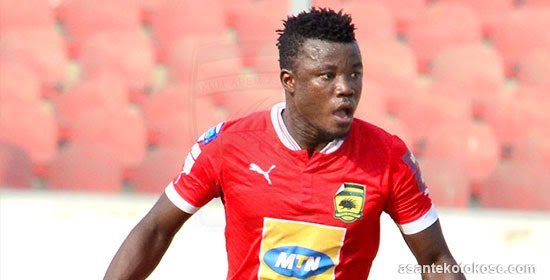 Former Asante Kotoko midfielder, Jackson Owusu, has been held up in his hotel in Kenya, unable to leave over unpaid hotel bills totalling $6,000.

But since the coronavirus brought football activities to a halt, the club has been unable to pay for Owusu’s accommodation, resulting in the hotel barring him from ever leaving until all bills are paid, a report by Nairobi News stated.

The versatile midfielder has been staying at Jimlizer Hotel in Buruburu where Gor Mahia Organising Secretary Judith Anyango ‘Nyangi” confirmed that K’Ogalo has accrued nearly $6000 due to earlier and current pending bills.

Owusu narrated to Nairobi News how he is dead broke and how his pleas to the club management to pay the pending bills have not been responded to as quickly as he expected.

“The Chairman (Ambrose Rachier) has always been promising to come on a number of occasions to assist me but he has not been here. I am not allowed to leave  with anything out of the hotel until there is a commitment from the club that the money will be paid. As at now I don’t know when this will happen,” said Owusu.

“My parents are poor and fully depend on me and they live in Kumasi many kilometres a way from Accra. But I have been forced to reach out to them and sometimes they have been forced to travel to town and send me something little. You also know that here at the club we have also not been paid and I can’t assist them

“I survive many a times by only eating one meal in a day and it has to be given out after the attendant has received the go a head from the manager. Some fans brought me food on Wednesday and I am really grateful for their kind gesture,” he added.

While reacting to the issue,  Gor Mahia Deputy Secretary General Ronald Ngala asked Owusu to be patient, saying the issue will be handled by the club.

“He should be patient. He will just be assisted,” Ngala said.

However, a source at the club revealed that it was not clear how Owusu was still staying in the hotel yet fellow foreign players David Mapigano and Juma Balinya are living in the rental houses.

“Usually when a foreign players join Gor they familiarise themselves with the environment for even a month then after salary payments they move out and rent a house on their own,” said the source who wished not to be named.