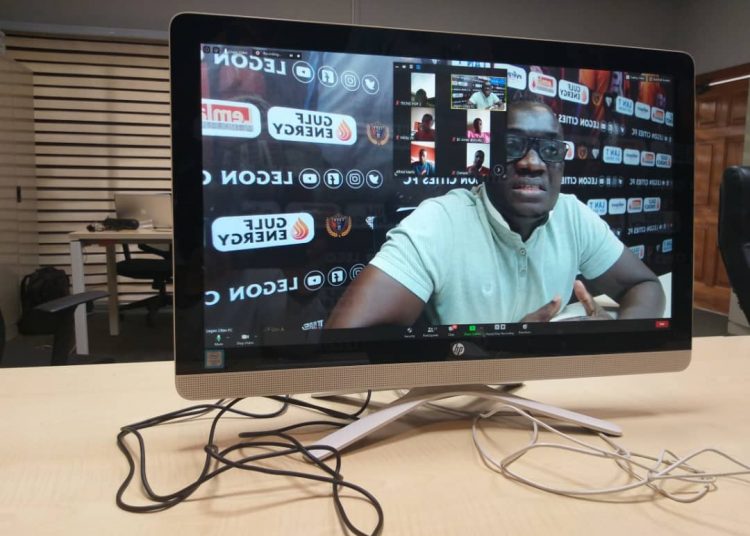 The management of Legon Cities Football Club have held a Zoom Hangout with fans of the club as clubs battle to survive the Covid. Team Legon Cities was represented by CEO Terry Maxwell–Aidam, Deputy CEO/Administrative ManagerKwabena Asenso and Club Communications Manager Kwame Dwomoh-Agyemang. Fans of the club were given the opportunity to ask as many questions of their choice with a greater number of them focused on the COVID and how the club was managing in these very difficult times.

CEO Terry Maxwell Aidam addressed as many of these questions which focused on transfers, the possibility of owning their own stadium, and their plans for the not too distant future. He added that the Club was still in talks with government and the University of Ghana on the possibility of using the acility as their home venue when the league resumes.

“We have started engaging the authorities at the Premier University and we are hopeful of a positive response from them. We believe that such a facility would help us grow our fan base and also align ourselves with the institution as the name of the club has a connection with the school.”

CEO Aidam further added that Legon Cities are willing to bring the business bit out of their Club where supporters can even make money out of the Club and that they are targeting campuses after the pandemic to boost their stadium attendance.

Terry Maxwell confessed the Club made an approach to ex Asante Kotoko striker, Sogne Yacouba but was quick to add that a deal could not be struck with the player and his representatives. He added that Replica jerseys were ordered before football came to a halt but would be available when football makes a return to avoid imitations by the public.

The team is said to have arranged a training program for the players to get them to an appreciable fitness level as and when the football season resumes.

The club is also set to unveil a number of new signings in the not too distant future to augment their squad.