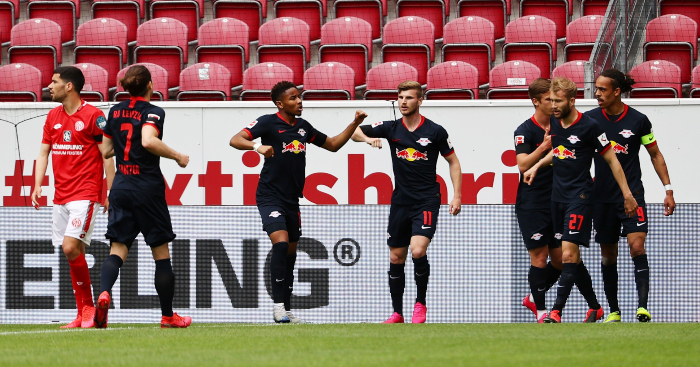 The 24-year-old has been heavily linked with a £52million summer transfer to the Reds.

And Werner recorded his personal best scoring season in the Bundesliga (24) with his trio of goals against Mainz.

He opened the scoring for his side before finding the net twice in the second half, with Yussuf Poulsen and Marcel Sabitzer also finding the target.

Werner is now only three goals from catching leading scorer Robert Lewandowski, who has netted 27 goals for Bayern Munich this season.

The result moved Leipzig up to third place in the race to secure a top-four finish.

Germany forward, who is also a reported target for Chelsea and Manchester United, teased a move to the Premier League in February.

The German has now scored back-to-back hat-tricks in both games against Mainz this season. 😱 pic.twitter.com/LxtL06Ubct

He said: “I can generally imagine playing abroad one day, although I don’t have any specific club where I want to be.

“I am open to everything. I was over in America for a holiday recently and English football was on all of the time.

“That’s an exclamation mark for the Premier League. But there are also big, famous clubs and it would certainly be fun playing there.”

In addition, Werner dubbed Liverpool the best team in the world and admitted he was ‘proud’ to be linked to them.

He said: “I know that Liverpool is the best team at the moment in the world.

“When you’re linked with that team it makes me very proud.

“It’s a pleasure but I know that Liverpool have a lot of good players and I have to improve myself, to learn much more things to get on this level to play there.”