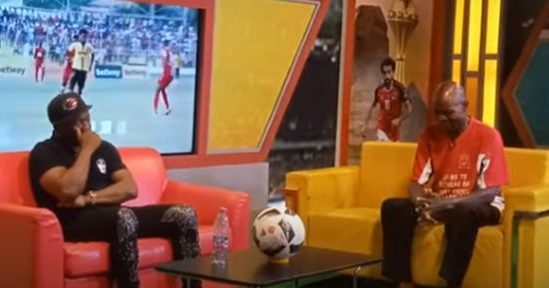 Former Black Stars and Real Tamale United star, Abedi Ayew ‘Pele’ shed tears on national television as he was surprised by a studio appearance of the man who first discovered him as a footballer – Herbert Adika.

The emotional moment was the beginning of a more than 5-hour long chat on GTV Sports Plus in which the Maestro captivated many an audience just as he always did in the field.

As part of the session, Herbert Adika the man who gave Abedi Pele the opportunity to play at juvenile level was led into the studio to share his account of how he knew the legend and how he discovered the talent.

As Mr Adika (now blind) sat and narrated his experiences with Abedi, the three-time African Player of the Year and 1993 UEFA Champions League winner could not help but shed tears.

Abedi Pele played for Mr Adika’s Great Falcos in his formative years and won the 1978 SWAG Colts Player of the Year.

Abedi Pele transformed into an exceptional player and played for and captained the Black Stars of Ghana for many years.

He is also the country’s second-highest goalscorer with 33 goals in 73 matches.

Abedi Pele gets emotional 😥 as Herbert Adika, the man who discovered him narrates how good the Maestro was. Happening now on GTVSports plus pic.twitter.com/ffPsEaVqIT